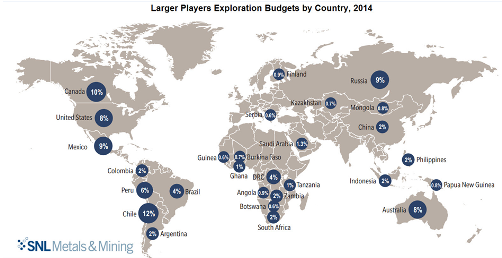 As part of the 25th edition of the Corporate Exploration Strategies (CES) study[1], a corporate exploration profile of each company budgeting at least US$50 million for exploration is available on the SNL company briefing books. In 2014, these 39 larger players budgeted a total of US$4.33 billion and accounted for 40% of the US$10.74 billion worldwide exploration total.

The top three explorers in 2014 include one copper producer (Antofagasta), a diversified major (Vale), and a major precious metal producer (Fresnillo). Chile-based Antofagasta has the world’s largest nonferrous exploration budget in 2014; this year’s program is growth-oriented and emphasizes late-stage and feasibility work. A strong grassroots effort includes programs in the Americas, Europe, Africa, and Australia.

In second place, Vale is the largest explorer among the diversified majors, also with an emphasis on late-stage work. Vale continues to challenge Norilsk for the title of world’s top nickel producer; its output of 260,200 mt in 2013 was just 25,000 mt short of the 285,000 mt produced by the Russian miner. Vale also considers copper one of its core commodities, although production growth has been more gradual. Significant exploration expenditures are also directed to fertilizers in Brazil and Peru.

Rounding out the world’s top three is Mexico’s Fresnillo; formed through a spinoff of Industrias Penoles’s precious metals assets, Fresnillo is the world’s largest primary silver producer and one of Mexico’s largest gold producers. Directed almost entirely to Mexico, Fresnillo’s budget is spread fairly evenly between all stages of exploration, with a slight emphasis on advancing several pipeline projects.

Conventional wisdom holds that the major companies leave grassroots exploration to the juniors. It may therefore be surprising that the larger players contributed 40% of all greenfields allocations in 2014. A persistent financing drought has squeezed juniors’ budgeting to the point that the majors have become the biggest drivers of early-stage exploration.

Similarly, the larger players traditionally dominate minesite spending; in 2014, however, they account for only 51% of the near-mine work as their investors demand improved returns over growth. It is also interesting to note that the larger players are responsible for just 32% of late-stage exploration and feasibility work.

Two of the mature jurisdictions, Canada and Australia, garnered much smaller percentages (10% and 7.5% respectively) of the larger players’ budgets than the shares allocated by the entire industry (14% and 12% respectively), as junior and intermediate companies contribute a considerable portion of the exploration dollars spent in these countries.

The United States also dropped in the rankings, although budgets by the larger players accounted for a greater share (8.4%) of the total than the share allocated by the group of 1,961 companies (7.1%). Russia moved up in the rankings, from eighth to fourth place, with 79% of its total allocations coming from seven larger players. Conversely, China, where 56 companies with allocations of less than US$20 million contributed 53% of the total, dropped from sixth to tenth place.

Thank you for citing SNL Metals & Mining if you use any of this information in your reporting. We welcome questions or additional data requests, as well, so please feel free to email me directly if needed at [email protected]