The research was conducted between September 26 and October 2, 2014 utilizing live person-to-person telephone calling to a random selected audience of First Nation community residents. Of the 200 respondents, a minimum of eight percent lived in communities not connected to the Ontario electricity grid and rely on diesel generation for electricity. The poll was commissioned by Environmental Communication Options, a firm actively engaged in a range of renewable, resource-focused and First Nation matters.

“Do you have a favourable or unfavourable opinion of the following options for new power generation sources in First Nations Communities?” 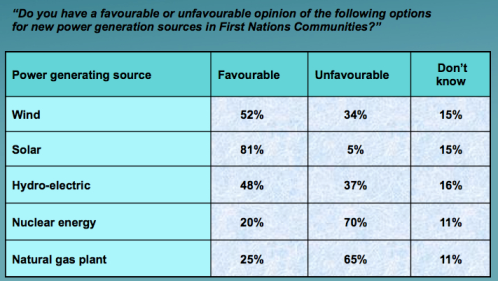 Seccaspina observed, “The residents of these First Nation communities deemed solar to be their favoured source of new power generation as evidenced by more than 8 in 10 supporting the technology. While natural gas was viewed favourably by only 25% or respondents, nuclear was less popular with a 20% favourability rate making it the technology least favoured by this group. Hydroelectricity and wind both were positioned mid-pack and are seen as favourable by half of the respondents.”

Support for solar rooftop installations garnered 88% support. While support dropped to 56% when considered in a ground mount solar farm situation and 44% support for wind turbine.

Don Huff, President of Environmental Communication Options, who has worked closely with Oraclepoll for nearly twenty years, provided the analysis of the acceptability scenarios for supporting mine development.

“Would you support or oppose the development of a new mine near your community under each of the following scenarios?” 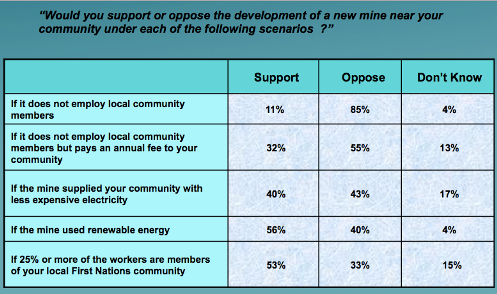 Huff stated, “The First Nation community residents polled had strong opinions on what was unacceptable to them. Not surprisingly, scenarios involving obvious community-focused benefits had the lowest levels of opposition. A notable result was the highest level of support for a new mine was attracted by the concept of using renewable energy at the mine.”

Huff concluded, “I contend the results of this poll are an important contribution to the ongoing conversation about the orderly development and acceptability of both renewable energy technologies and new resource development in Northern Ontario.”

A copy of the presentation can be found on Oraclepoll’s website at: www.oraclepoll.com.

For more information or to arrange interviews, contact Michael Zupanic at [email protected] or 416-972-7404.