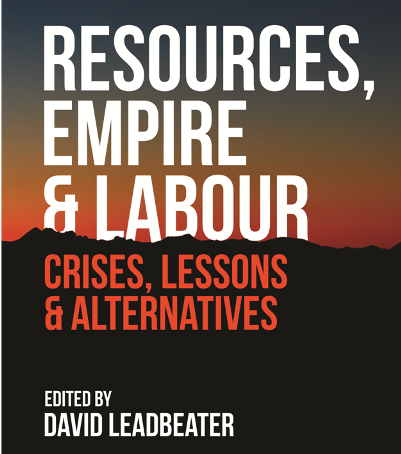 The interconnections of natural resources, empire and labour run through the most central and conflict-ridden crises of our times: war, environmental degradation, impoverishment and plutocracy. Crucial to understand and to change the conditions that give rise to these crises is the critical study of resource development and, more broadly, the resources question, which is the subject of this volume. Intended for researchers, students and activists, the chapters in Resources, Empire and Labour illuminate key aspects of the resources question from a variety of angles through concrete analyses and histories focused on the extractive industries of mining, oil and gas.

To discuss the evidence on the role of natural resources in Japanese imperialism, a useful point of departure, despite many flaws, is Yasukichi Yasuba’s 1996 article “Did Japan Ever Suffer from a Shortage of Natural Resources Before World War II?” Yasuba challenges the resource-shortage explanation of Japanese imperialism.

According to Yasuba, proponents of the resource shortage view emphasize that Japan had a high population density and also suffered from a lack of natural resources. The situation became particularly acute in the 1930s with the rise of protectionism in the high-income countries to which Japan shipped many of its exports.

These features of the situation made it attractive for Japan’s leaders to pursue military expansion. By establishing political control over more territory, it could obtain more resources and it could create a trade bloc and thereby find markets for its exports, markets that would serve as alternatives to the markets of the other imperialist powers and their areas of control. The territories acquired could also provide an outlet for surplus Japanese population.

Yasuba’s main claim is that although Japanese imperialist expansion was linked to the quest for natural resources, the need for such resources was artificially enhanced by the promotion of industries for military production. Otherwise, Yasuba asserts, the pre-Second World War Japanese economy would not have experienced any pressing shortage of natural resources. Yasuba presents historical statistics to counter a common tendency to project Japan’s current paucity of natural resources into the distant past.

When Japan began trading under unequal treaties with the West in the 1850s (late Tokugawa period), the country was actually a natural resource exporter. The tendency of Japan to export natural resources and import
manufactured goods continued into the 1880s. Thereafter, the pattern became more mixed as Japan found a niche in light manufacturing, but Japan’s demand for natural resource imports remained limited compared to later when the industrial structure shifted more toward heavy industry.

First, because heavy industry required iron, nickel, oil and so on, and the domestic sources of these were limited, it raised the demand for imported goods. Second, because heavy industry is capital-intensive, the expansion of heavy industry relative to the expansion of light industry resulted in reduced demand for most categories of labour, including agricultural labour, which reduced costs and prices for agricultural products and for the output of associated industries, and contributed to overpopulation in the rural areas and pressure to emigrate.

There is an element of truth in Yasuba’s argument that military production and the associated encouragement of heavy industry increased Japan’s demand for natural resources. This is most clearly the case with Japan’s moves into Manchuria in the 1930s and into Southeast Asia during the Pacific War (1941–45). Yasuba is also surely right to challenge the common tendency to project Japan’s paucity of natural resources into the past and to show that the adequacy of Japan’s natural resources for domestic supply deteriorated with changes in the industrial structure and with population growth and domestic resource depletion.

Framed with an explicit focus on Japan’s resource adequacy, Yasuba’s argument does not specifically address the causes of Japan’s imperialist expansion from the mid 1890s. Rather, he is primarily concerned to explain the “renegade” period of Japanese imperialist expansion beginning in the late 1920s.

Before evaluating the different hypotheses about Japan’s empire, it is useful to distinguish the term “natural resources” from other associated terms. Heavy industry particularly increases an economy’s requirement for minerals as well as oil and gas, and these may be considered natural resources in a narrow sense.

A still more general term is “commodities,” employed not in the broad sense of all marketed goods, including manufactured products, but in the narrower sense of standardized products (not including manufactured goods). Commodities in the narrower sense, sometimes called primary products, include raw materials for industry, but they also include products (for example, rice) that are consumed directly by the population.

An Overview of Japanese Imperialism and the Role of Natural Resources

To synthesize the material presented here and evaluate hypotheses about Japanese imperialism, I propose a three-stage approach to viewing Japan’s empire.

The first stage in the years after 1869 consisted of expansion into territories that were either linked to Japan previously — Hokkaido and Okinawa — and/or were sparsely populated or unpopulated (the Kurils and the Ogasawara Islands). This expansion occurred while Japan was still a largely feudal society making some use of borrowed technology from the West, particularly military technology and modern ships. The first phase of expansionism might have been regarded as “imperialist” by the Ainu of Hokkaido or by the Okinawans, while it was viewed as nation-building by the Japanese and by the Western powers.

The move toward large-scale settlement of Hokkaido, for example, was similar in some respects to the settling of, say, the Canadian West. The expansionism of this period was based on broad concerns with economic development and security, and in the most important cases — Hokkaido and Okinawa — into areas already having some Japanese population. There was no quest for raw materials for heavy industry, which did not exist in Japan when this expansionism began, but there was an interest in resources in land and other resources for primary industry.

The second stage of Japan’s empire, dating roughly from the mid 1890s to the late 1920s, involved more clearly imperial expansion into overseas territories through the use of military power to defeat China and Russia in the Sino-Japanese and Russo-Japanese wars and to seize German territories in Asia during the First World War. Perceived costs and benefits were such that Japan’s elites viewed it as rational to use military power to acquire overseas territories. Japan was still a second-rank military power for most of this stage, so its leaders were careful to keep on good terms with powers such as Great Britain and the United States.

In the early decades of this stage, three powers — Japan, China and Czarist Russia — had designs on the Korean peninsula. Japan emerged the victor, picking up a major indemnity payment, treaty port rights and Taiwan as a colony from China through victory in the Sino-Japanese War of 1894–95, forming the Anglo-Japanese Alliance as a junior partner of Great Britain in 1902 and gaining Korea first as a protectorate through victory in the Russo-Japanese War of 1904–05 and then as a colony in 1910. In this stage the economic interests in the colonial or semi-colonial territories are not particularly focused on minerals or fuel sources but more on supplies of primary products and markets for light manufactured goods.

In the later years of this stage, there is no significant acquisition of foreign territory by military force, but there is a very substantial ongoing expansion of Japanese capital in Japan’s formal and informal empire that should not be overlooked.

The third stage of Japan’s empire can be dated from the Manchurian Incident of 1931. This is the stage that corresponds closely to the period of Japanese history that Yasuba seeks to explain. The acquisition of natural resources in the narrow sense becomes a growing concern in this period, and that concern accelerates with the development of trade blocs, the growing probability of world war, the demands of the second Sino-Japanese War (1937–45), the U.S. oil embargo (1941) and then the Pacific War (1941–45). The factors behind Japanese expansionism in this period include the industrial policy and changes in industrial structure that increased requirements for natural resources.

They include as well factors emphasized in traditional histories such as the use of propaganda about foreign adventures to help maintain the support of workers and peasants, and growing Chinese antagonism to Japan’s informal empire in China, which triggered Japanese retaliation. Behind the scenes, and often neglected in standard histories, was the rise in Japanese technological capability in certain key industries more or less to the level of the United States, which emboldened Japanese elites.

In this three-stage approach to explaining Japanese expansionism, then, the quest for natural resources in the narrow sense of minerals and fuel plays a major role but only in the third stage. Considering resources in the broadest sense, however, it is relevant that all of the territories supplied primary products to Japan, all of them provided outlets for Japanese production and at times they provided an outlet for Japan’s surplus agricultural population. Other hypotheses among the five previously highlighted also have a role to play in a full explanation.

Young (1999: 217) claims that from the early to mid-thirties the zaibatsu were in a surplus capital situation due to the weak state of the Japanese economy and were content to provide funding for Japanese state-capitalist enterprises in Manchuria.