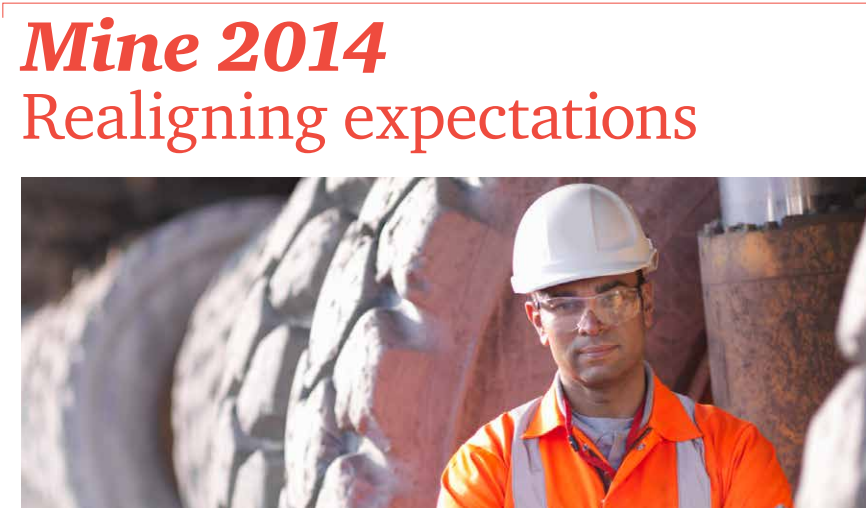 The global mining industry’s confidence crisis continued throughout 2013 despite embracing radical measures to improve shareholder returns and enacting new strategies to place the industry on a firmer long-term footing. According to PwC’s 11th annual global report, Mine 2014: Realigning Expectations, a record $57 billion in impairment charges saw profits at the world’s biggest 40 mining companies plunge 72 per cent to $20 billion – the lowest in a decade.

Total impairments over the past two years were almost $100 billion and now equal 44 per cent of capital expenditure. Almost a quarter of the Top-40 took more than $1 billion in impairments during the year.

The market value of the top 40 dropped 23 per cent, equal to $280 billion – with Fortescue Metals only one of only four companies to see an increase – to $958 billion. Gold miners led the retreat, shedding $110 billion in market value – 40 per cent of the total value drop.

However, the industry heeded shareholder calls to improve returns with dividends increasing 5 per cent while the group’s effective tax rates soared from 26 per cent to 60 per cent, mainly due to losses and increasing demands from governments globally.

In addition, nearly half the companies in the Top-40 have appointed new chief executives over the past two years, with seven new faces appearing in 2013.

PwC Australia’s Energy, Utilities and Mining leader Jock O’Callaghan said the pace of change was unprecedented, and while many hoped the industry had reached rock bottom it was too hard to call whether conditions were poised to improve or would continue to bounce along the bottom.

“There’s no doubt the industry has moved fast to counter its sudden change in fortune: fleets were parked, jobs slashed, development projects deferred – every dollar spent requires care and consideration.

“These are the sorts of traditional levers just about every mining company in the world has employed at some point in recent years,” Mr O’Callaghan said “but they are ultimately unsustainable and they simply won’t support growth.

“What we are now seeing among the Top-40 is a definitive move beyond these short-term market friendly fixes in favour of a fundamental strategic shift that focuses on the industry’s long-term prosperity to take advantage of the industry’s still strong fundamentals.

“This can be seen in a focus on simpler structures, a bid to boost returns from higher quality assets, a willingness to share critical infrastructure and a concerted effort to improve productivity levels, which remain way too low.”

Productivity – More than IR reform
Mr O’Callaghan said a disconnection had emerged between company strategies and what was actually happening inside the mine gates.

“Many miners from traditional markets are talking about reducing costs and, in some instances, heralding increased production volumes under the broad banner of productivity gains but many are still executing a strategy at their mines which is effectively the same as during the boom.

“Serious reform in this area can’t be made by those who persist with three common ideas.

First, the idea that no two mines are the same, otherwise known as the NIMM defence – “Not In My Mine” – is simply not right. Secondly, a belief persists that larger mines inherently achieve greater equipment efficiencies, when data shows us that bigger is not always better. Finally there is an expectation in some quarters that labour reforms are the silver bullet, when in fact they are only one piece in the puzzle.”

Those who will emerge on top from the turmoil will be those companies that can achieve demonstrable lifts in productivity while maintaining a sensible and sustainable reign on costs and without compromising asset values.”

Dividends: Becoming unsustainable?
Over the past five years dividends have almost tripled from $15 billion to $42 billion and, as a percentage of net profit, have risen from 20 per cent in 2010 to 205 per cent in 2013. Putting aside the impact of impairments, the 2013 figure represents one-third of operating cashflows.

“The very high dividend payout ratio shows companies are doing everything they can to appease shareholders but their profit base is shrinking and operating cash flows are declining.”

The high payout ratios suggest that money is being paid out of retained earnings and potentially through debt.

“Companies from developed economies appear to have collectively fallen into a place where dividends must be paid despite diminished profitability, that they must at least equal last year and that surplus earnings be automatically returned to shareholders.

“In contrast companies from the developing markets still recognise that dividends are discretionary and must be closely aligned to profitability.

“At some point, if conditions remain poor, the market will need to be tested and the dividend tap turned off.”

Despite expectations that capital expenditure would be slashed this year it actually grew 2 per cent to $130 billion – 27 per cent higher than in 2011.

Taking control: The rise of the emerging market miners
For the first time the bulk of the Top-40 (53 per cent) comprises companies from emerging markets – another trend that’s expected to continue.

Emerging market companies contributed aggregate net profits of $24 billion, down from $39 billion in 2012, compared with those from developed economies which reported a $4 billion net loss, down from 2012’s $33 billion net profit.

What for the future?

Mr O’Callaghan said he expected the sharp cost cutting of recent years would begin to flow through to bottom line performance and high levels of capital discipline would prevail in the medium term while new strategies – often led by new CEOs – would also start to gel.

“This is an industry where asset cycles are among the longest of any industry – year on year comparisons should be seen as short term. The way to think about the industry is that it’s made a series of entirely predictable, short term responses while introducing longer term strategic shifts that could take years to bear fruit.

“It’s a work in progress and this year should be seen as one of strategic transition that will shape the industry for the next decade and beyond.

“In the meantime commodity prices remain volatile, global growth is off its highs and other threats such as resource nationalism continue to grow.

“Companies need to put the case to investors that relative to market conditions they have had a very close focus on shareholder returns in recent years but they need to start investing in their future – whether through innovation, increased exploration activity or mergers and acquisitions – and pare back expectations around dividends and capital returns.