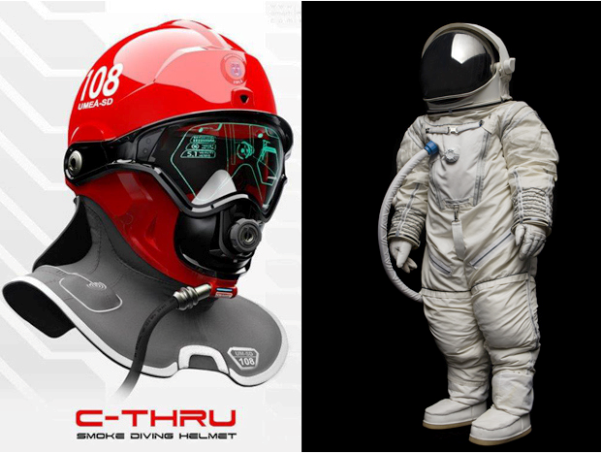 As mining activities go deeper beneath the surface of the Earth, the harsher the environment becomes for people and machines. Intense heat, lack of fresh air, contaminants and structural instability is driving researchers’ efforts at the Centre for Excellence in Mining Innovation (CEMI) to design protective equipment that can stand up to the realities of a deep mining environment.

The next generation of integrated personal protective equipment (IPPE) will represent a remarkable feat of integration and collaboration by multiple industry partners. The suits and helmets will embody everything from thermal controls and air supply to communications and heads-up display capabilities. They will filter, cool, protect and monitor vital signs, while providing lighting, power supply and recording functions.

“All mines will have the same issues as we go deeper,” says Douglas Morrison, CEMI president and chief executive officer. “Many are at that Rubicon we call 2.5 kilometers. That’s typically the point where it becomes difficult to push cool air from the surface and keep it cool when it arrives. It’s a significant line in the sand.”

The idea behind the IPPE project is simple enough: designing helmets and suits that protect people in these stressful conditions, Morrison notes. “For years miners have been strapping on pieces of equipment, from batteries on their hips to hard hats. We can do much better than that.”

Much of the inspiration behind the new design proposals are being gleaned from space exploration, says Dale Boucher, president and CEO of Deltion Innovations Ltd. in Sudbury, Ont., one of several industry partners on the project and a developer of tools for deep space mining.

“Deep mining presents a problem that space technologies can help solve,” he explains. To that end Deltion has come up with three basic concepts for the new-generation “coveralls” – all of which have been derived from the manned space program.

The first is a technique for cooling the core temperature of humans that evolved from the Apollo era of the space suit. The cooling system is being coupled with a unique breathing system from the Kennedy Space Center to provide extended periods of clean air intake.

The second is a sensor for measuring critical biometric signatures developed by the Canadian Space Agency. “Nobody has to tape on electrodes – it all fits into a vest,” Boucher notes. “The signatures can be transmitted to a monitoring station or a trauma centre to speed dispatch.”

The final integration piece is a Kennedy Space Center technology that can predict heat stress failure before symptoms occur. “If you start to exhibit the symptoms of heat stress, it’s usually too late,” Boucher says.

“Integrating all three elements into a single set of coveralls is what we’re chasing,” he adds.

The helmets themselves will be an equally intriguing piece of integration work, encompassing everything from video and camera capabilities to built-in displays and noise cancellation. The inspiration Morrison says comes from various sources, from motocross display systems to built-in breathing and filtering apparatus used in firefighting.

“We have to make work more effective and comfortable, complete with good voice and video communications,” Morrison says. “Much of this is bringing in technologies that already exist. But it’s doing it in an entirely new way.”

This content was developed by Postmedia’s advertising department in collaboration with a client for commercial purposes. Postmedia’s editorial departments had no role in its preparation.

For the original version of this article, click here: http://business.financialpost.com/2014/05/20/2-5-kilometers-beneath-the-earths-surface-is-the-next-frontier-for-space-suited-miners/?__lsa=79b4-4887