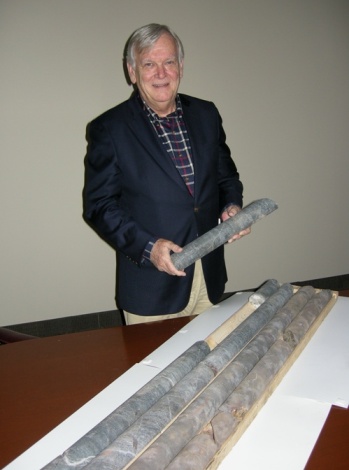 Call them the little chromite mouse that roared. Cliffs Natural Resources has grabbed the Ring of Fire spotlight over the last five years, but it’s been the strategic and shrewd moves of KWG Resources’ president-CEO Frank Smeenk that’s now placed the Toronto-based junior miner at centre stage.

The company has the only viable and secured route to haul potentially millions of tonnes of chromite ore out of Ontario’s Far North for perhaps many generations to come.

The legwork they did back in 2009 to use mining claims to stake a 328-kilometre-long corridor for a future railroad was done out of practical necessity, but it’s had wider ramifications.

“Getting stranded deposits to market is a movie I’ve seen a few times before in Canada,” said Smeenk, a lawyer by training with close to 27 years in the resource industry. “It was the obvious thing to do.”

The area has no transportation infrastructure to speak of.

KWG’s staked corridor runs almost entirely atop a glacial esker, a long gravel ridge that’s the only elevated and dry ground out of the James Bay swamps to the Canadian National Railway’s main line near Nakina.

That ground was coveted by Cliffs who duked it out with KWG at an Ontario Mining and Lands Commissioner hearing last year. Cliffs sought an easement to run a road up KWG’s route to access its Black Thor deposit.

The tribunal’s ruling in KWG’s favour surprised many, including senior Northern Development and Mines officials, but not to Smeenk who relied on historical precedent in Ontario’s mining history and the tools made available for developers within Ontario’s own Mining Act.

Moe Lavigne, KWG’s exploration and development vice-president, gives all the credit to his boss for realizing that ore stuck in the middle of the James Bay lowlands is worthless unless it can be hauled to market.

“He was the first person to really wrap his mind around this. This is the nature of Frank Smeenk: he thinks way ahead of everybody. He thinks long term and he committed the dollars to securing that route.”

Armed with $18 million after selling its smelter royalty interests in three chromite deposits in the Ring, KWG had substantial working capital that enabled the company to finance many of its studies and initiatives.

Ironically, it was Smeenk who invited Cliffs into Ontario as an investment partner after cold-calling them in 2009. The corridor was staked with the Ohio mining giant’s blessing.

Timing was critical since the McGuinty government was primed to pass the Far North Act in 2010, a murky piece of legislation that proposed protecting roughly half of the northern Boreal forest for conservation.

The opportunity to develop these historic discoveries was too good for Smeenk to pass up.

“You can count on one hand the number of times the human race has discovered mineral deposits that will last two centuries. That’s what we have here.”

KWG has a 30/70 stake in a joint venture with Cliffs on the Big Daddy deposit and holds a major interest in the Black Horse deposit with Bold Ventures.

They’ve game-planned a scenario on how to transport and process all Ring of Fire ore under the auspices of a federally-run inland port authority and to use the provincially-owned Ontario Northland Railway to haul it out.

Instead of buying high-priced Ontario electricity to power a ferrochrome refinery, KWG is conducting its own metallurgical testing in Sudbury to evaluate the feasibility of a natural gas-powered mill using a new chromite reduction method.

“We’re going to use the asset to achieve its highest and best use.”

In evaluating the province’s role in the Ring, Smeenk remains irked that Queen’s Park has shown favouritism to Cliffs in agreeing to negotiate a favourable power rate for a refinery and subsidize its project with taxpayer dollars to build infrastructure.

“For the government to make such decisions with my money is the offensive part,” said Smeenk. “Every other electrical user in Ontario would cry foul and run to Queen’s Park to get the same rate.”

Now with the province’s creation of a Ring of Fire development corporation, Smeenk feels his company’s development proposal finally has an audience with government decision-makers.

“I think Ontario is realizing the value of the elegant scheme we’ve come up with to develop the Ring of Fire. We’re getting some traction and we’re sharing information with them.”

While KWG’s relationship with Cliffs is less than collegial, Smeenk said he’s struck up a solid relationship with his Ring of Fire neighbour, Noront Resources, and its new boss, Alan Coutts, whose company has two nickel and chromite deposits.

Their regular conversations have revolved around a possible collaboration on Noront’s proposal for an east-west road into the James Bay region and its possible use to transport construction materials.

“I think you’ll see things move along. We’ll be working together more intimately step-by-step in these developments.”

One Response to A vision for the Ring of Fire: 2014 Top 5 Northern Leaders: Frank Smeenk – by Ian Ross (Northern Ontario Business – February 2014)