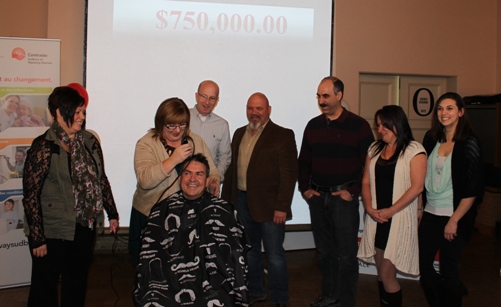 SUDBURY, January 7, 2014 – Vale and The United Steelworkers (USW) announced today that they have reached their goal to collect $750,000 in a joint fundraising campaign for the United Way Centraide Sudbury and/et Nipissing Districts.

“Achieving this fundraising goal speaks to the incredible generosity of our employees and their ongoing commitment to our community,” said Kelly Strong, Vice-President, Canada and U.K. Operations, Vale. “It’s an accomplishment we can all be very proud of.”

“I respect a leader who puts his faith – and in this case his head – on the line to support employees,” said Mills, referring to the head-shaving commitment by Strong. “Vale employees, management and the USW are major supporters of this community and achieving this outstanding goal together is true leadership on all levels.”

Vale matches employee and pensioner’s contributions to the campaign, dollar for dollar. Employees have the opportunity to make regular contributions or a one-time donation through a payroll deduction program.

“Year after year, members of the USW Local 6500 continue to support their community and ensure the fundraising goal is reached by personally contributing to the United Way/Centraide campaign,” said Rick Bertrand, President, United Steelworkers, Local 6500.