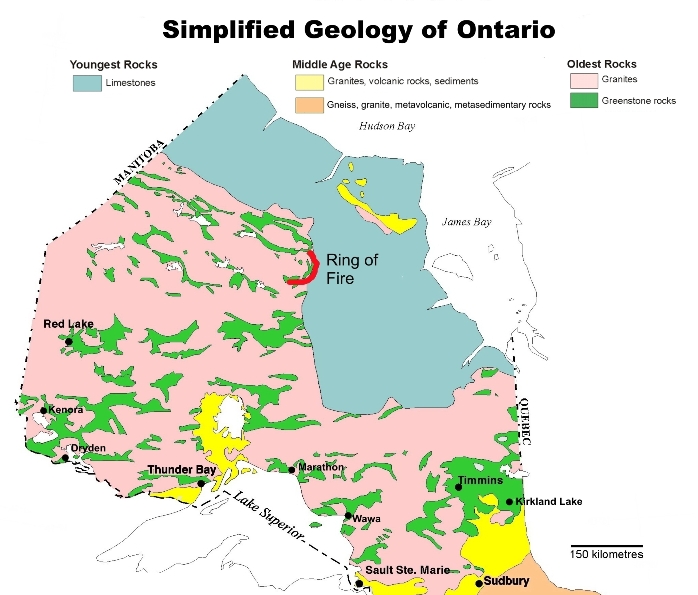 In Sudbury, when people hear about the Ring of Fire, they think of Cliffs Natural Resources and its plan to ship chromite from a mine in northwestern Ontario to a plant in Capreol for processing that would create between 300 and 400 local jobs. But we should remember that this proposal is only a “benchmark” scenario and that many issues still need to be resolved. As a result, the location of this facility could change.

And Cliffs and its Black Thor mine represent only one of the Ring’s many promising mineral resources and future discoveries.

Located 500 kilometres northeast of Thunder Bay, the Ring of Fire contains billions worth of chromite — among the best deposits in the world — plus nickel, copper, platinum group elements, gold, zinc and vanadium metals.

In 2007, an interesting mix of six geologists and junior mining executives – Richard Nemis, Mac Watson, Frank Smeenk,  Neil Novack, John Harvey and Don Hoy – collectively discovered the geologically rich Ring of Fire. It is the most significant mineral discovery in Canada since the Sudbury Basin in 1883 and the Timmins gold camp in 1909.

In an engaging presentation about the Ring of Fire at the Prospectors & Developers Association of Canada convention in March 2013, geologist James Franklin outlined the staggering economic value of the Ring of Fire.

Franklin was the chief geoscientist at the Geological Survey of Canada from 1993 to 1997. He is one of the country’s top experts on the Canadian Shield geology underlying northwestern Ontario, including the Ring of Fire.

By comparing the similar geologies between the Ring of Fire and surrounding regions and that of the enormously rich Abitibi-Greenstone belt between northeastern Ontario and northwestern Quebec, Franklin has come up with some educated guesses of the financial values for the deposit types found in the Ring. For slightly over a century, the legendary Abitibi-Greenstone belt has produced hundreds of billions of dollars’ worth of mostly gold, silver, copper and zinc.

“The Ring of Fire is a truly extraordinary mineral discovery due to the various types of deposits. Similar deposits, elsewhere in Canada and around the world have yielded billions of dollars of metallic metals,” Franklin said. “Due to roughly eight smaller VMS-type deposits that hold copper, zinc and silver, which have not been thoroughly drilled-off, the Ring of Fire could ultimately produce between $30 billion to $50 billion worth of these metals and perhaps another Kidd Creek ore body, which has been in operation since the mid-1960s in Timmins.”

These financial projections are on top of the currently accepted Ministry of Northern Development and Mines valuations of $50 billion for chromite and $10 billion for Noront Resources’ nickel, copper, PGE mine!

“These are only conservative estimates,” Franklin said, “and the provincial government should spend at least $50 million over the next few years on more aerial high-resolution geophysical surveys, mapping where outcrops permit and extensive on-ground geochemical and till sampling on a regional basis. Every dollar spent on geoscience results in five dollars of industry activity.”

And while he does not want to venture a guess at the value of future chromite discoveries, he believes the current chromite reserves of roughly 220 million tonnes could easily be doubled. He also indicated the chromite discoveries in the Ring of Fire are “very, very well behaved” so that initial (inferred) reserves estimates routinely move over to the (indicated and measured) categories with more infill drilling due to the enormous size and predictability of this massive deposit.

KWG Resources recently announced that it has discovered an additional 46.5 million tonnes (inferred) of chromite at the Black Horse deposit, of which the company has 80% control, while Bold Resources has the remainder. This is the second largest chromite deposit in the mining camp after Cliffs’ Black Thor project, which has 102 million tonnes (measured and indicated) and 33 million metric tonnes (inferred). However, the Black Horse deposit has a much higher grade, which could justify it being mined from underground, without the environmental impact of other proposals.

“We are tremendously pleased with these initial results,” said M. J. (Moe) Lavigne, vice-president of exploration and development at KWG. “Our next step is to continue to expand this resource, as well as conducting infill drilling. This deposit will allow KWG to put together its own chromite mining development plan.”

The massive chromite deposit in the Ring of Fire follows a 12 km strike-length. Each mining company seems to have a portion of this deposit, which remains to be fully explored. In the world of chromite mining, the Ring of Fire, if developed in an economically sustainable manner, will be a game changer.

At the recent Noront Resources’ annual general meeting, Alan Coutts, the company’s new president and CEO, was also very enthusiastic about the future resource potential of the Ring of Fire camp. A professional geoscientist, Coutts has more than 25 years] of executive management experience — mostly with the Falconbridge/Xstrata organization — in a variety of roles, across multiple commodities, including nickel and zinc, and in many remote locations in Canada and abroad.

“The Ring of Fire represents a wonderful exploration opportunity for a host of mineral deposits,” Coutts said. “I’m excited about the prospects for new nickel sulphide — PGM discoveries in the region. In my experience, these deposits tend to occur in clusters, whether it’s Canada, Russia or Australia. To think that Noront’s Eagle’s Nest deposit is the only one is like saying that there will only be one nickel mine in the Sudbury basin.

“Noront’s plan over the next three years is to develop Eagle’s Nest and our exploration activities will be focused on the discovery of additional Ni-Cu-PGM deposits.”

Noront has the largest land holdings in the Ring of Fire.

While the Eagle’s Nest nickel mine is its first priority, Coutts intends to also work on the Blackbird chromite deposit that contains 44 million tonnes. “We are confident that the Blackbird chromite resource can be significantly increased. We may develop the chromite potential alone or look to do something in partnership with other industry players in the region.”

Historically, the federal and provincial governments have funded vital infrastructure projects — both rail and road — which enabled private sector investments in resources, creating jobs, wealth and tax revenue, as well as the sustainable development of remote northern regions.

The construction of the Temiskaming and Northern Ontario Railway in 1903 (known today as Ontario Northland Railway, or the ONR, a provincial crown agency) led to the discovery of silver at Cobalt that same year, gold at Timmins in 1909 and at Kirkland Lake in 1911.

By opening up this isolated region, many other discoveries occurred, including the Rouyn/Noranda and other gold mining camps in northwestern Quebec. Today, a spur line that extends into Rouyn-Noranda is a critical link for the shipment of mineral concentrates and sulphuric acid to global markets. Except for Cobalt, all these mining camps are still in production.

Due to the continuing gold boom in Red Lake, the Ontario government built a 172-km highway from 1945 to 1947, connecting the isolated community to Highway 17. During the late 1950s, Prime Minister John Diefenbaker started the Roads to Resources initiative to help mineral development in Canada’s north.

In the 1960s, the Ontario Northland built spurs to three new mines — the Sherman, Adams and Kidd Creek — to ensure economic development and jobs. Interestingly, the line to Kidd Creek was built on mining claims staked for the purpose, just as KWG has now done, to extend the ONR to the Ring of Fire.

In 2009, at the height of the economic crisis, the federal and Ontario governments spent $14 billion to bail out General Motors and Chrysler — a worthy cause considering the enormous economic impact from the auto sector on the provincial gross domestic product — but most of that money will not be paid back. These manufacturing jobs can be easily transferred to the U.S. and Mexico, and Ontario is not getting its fair share of the current auto-sector expansion plans.

At a fraction of that bailout cost, through an innovative proposal that depends on federal government-backed loans and perhaps some equity participation, a railroad would open an isolated mineral-rich region to sustainable development for at least 75 to 100 years. Mining jobs cannot be transferred to other jurisdictions and the Wynne government may be able to strategically leverage a value-added stainless steel industry for Ontario if it implements the right policies.

In part 4, we will take a look at an innovation solution on who should build, and how to pay for a railroad into the Ring of Fire.

For Part 4 of this 4-part series on the Ring of Fire, click here: http://republicofmining.com/2013/11/17/transportation-costs-key-for-successful-ring-of-fire-development-by-stan-sudol-sudbury-star-november-18-2013/

For the original version in the November 16, 2013 edition of the Sudbury Star: http://www.thesudburystar.com/2013/11/15/accent-rings-potential-astounding