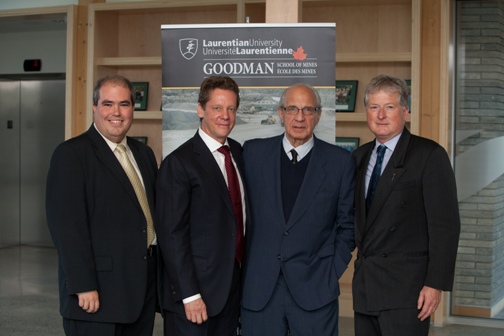 Mr. Friedland delivered a public lecture at Laurentian University on Wednesday evening, drawing on insights gained during his career in international resource development.

Mr. Friedland was introduced by Goodman School of Mines benefactor Ned Goodman, CEO of Dundee Corporation. Mr. Friedland said he was pleased to share the stage with Mr. Goodman, and to have the opportunity to expand on the role of mining in Canada and around the world. “Canadians are recognized in the international mineral resources sector as leaders and achievers of distinction,” he said. “I am honoured to have been invited to speak at Laurentian University, one of Canada’s premier centres of learning in the sciences of mining and minerals, and to share some of my experiences on the front lines.”

Mr. Friedland has been named to Financial Post Magazine’s “Most Influential Canadians” list and was recognized as the “Mining Personality of the Year” at the 2012 Asia Mining Awards. He also received the “Dealmaker of the year Award” for Ivanhoe Mines from Australia’s Diggers and Dealers Mining Forum in 2011. In 2009, Mr. Friedland was named one of Canada’s “Super Seven Dynamos” by the Northern Miner publishing group. He also is well known as an original investor in Diamond Fields Resources, which discovered one of the world’s richest nickel deposits at Voisey’s Bay, and as the company’s Co-Chairman who led negotiations resulting in the project’s $4.3 billion sale to INCO in 1996.

Earlier today, Mr. Friedland also presented to a group of students who heard his perspective on the importance of mining and resource development in a changing global landscape.

“We’ll soon be sharing this planet with nine billion other inhabitants – most of whom, given a choice, would prefer to live in safety and comfort, drive cars, and have air conditioning and smart phones. They also want clean air and clean water,” said Mr. Friedland. “In addition to its fundamental mission of finding and producing critical materials to support growing economies, the mining industry has a responsibility to present and future generations to develop and adhere to ethical and responsive practices, delivering effective management of the impacts of mining metals.”

Mr. Friedland’s lecture was the first in a series of public lectures known as “Goodman Talks,” launched by the Goodman School of Mines. The Goodman School promotes and develops mining education across six disciplines at Laurentian: Earth Sciences, Engineering, Environment and Restorative Ecology, Indigenous Relations, Management and Occupational Safety and Health. It was founded in 2012 to enhance executive education and enhance the skills of future professionals in mineral exploration and mining. The Goodman School is led by Franco Nevada Founding Executive Director, Dr. Bruce Jago.

Laurentian University is one of the fastest growing universities in Canada in the past decade, now serving close to 10,000 students. With its main campus in Sudbury, it now offers a growing number of programs in Barrie to the 1,200 students located on that campus. Laurentian has the highest post-graduation employment rates in Ontario after 6 months at 92% and 95% after two years. The University receives high recognition for its enviable class sizes, having one of the lowest average class sizes in Canada.

For further information or to schedule an interview, please contact:

Ontario backs away from plans to buy new nuclear reactors – by Adam Radwanski (Globe and Mail – October 10, 2013)
NEWS RELEASE: What has mining done for Ontario lately?