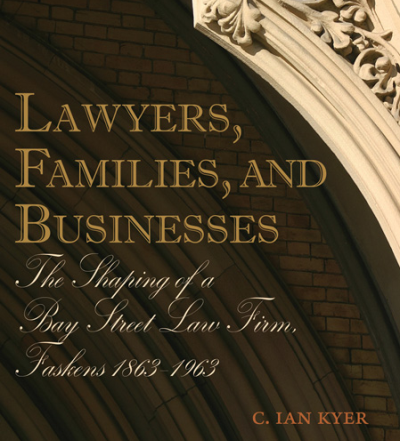 For a time the Gooderhams considered buying one or more of the companies that had started to mine copper and nickel in the Sudbury basin but ultimately decided against it. Although Wallace Nesbitt personally invested in the Copper Company of Canada, which would eventually merge into Inco, the Gooderhams looked west. Tom had maintained his interest in the region and now focused it on several mines in the BC interior along the border with the United States. In the early 1890s gold, silver, and copper had been found in the Kootenays. Later lead mining would also develop. The Canadian Pacific Railway had linked British Columbia with central Canada and Tom became a frequent traveller on the CPR, visiting the small mining town of Rossland, near Red Mountain, and nearby Trail, along the Columbia River.

In January 1897 Tom Blackstock and George Gooderham’s eldest son, William George Gooderham, put together a syndicate that included Beatty and Senator George Albertus Cox. They paid $850,000 to buy the War Eagle gold mine and its associated mines, known as the Poorman, the Iron Mask, and the Virginia. Tom was given the task of overseeing these investments. He feared that War Eagle would be forced to pay exorbitant rates for shipping ore and for its refining, later explaining that “mining is in the nature of a manufacturing business which requires the utmost economy in every detail to enable it to be carried out successfully upon a large scale.”

Frederick Augustus Heinze of Butte, Montana, had built a smelter at the mouth of Trail Creek, about ten kilometres from the Red Mountain mines, and a narrow gauge railroad to connect the mines to his plant. From the tone of Tom’s letters, it seems that he found Heinze aggressive and demanding. In late November 1897, when Tom learned that the CPR was planning to buy out Heinze, he had a new concern. He wrote to Sir Richard Cartwright, the federal minister in Ottawa, that he feared “we shall have to pay the piper in some way.”61 Tom was concerned that the price the CPR would have to pay to buy out Heinze would drive up freight and smelter charges and that if the CPR had a monopoly, those costs would be passed along to War Eagle.

Tom expected the federal government to “bonus” the CPR for building a line from Robson to Penticton and wanted it to insist on reasonable freight and smelter rates for commercial customers using the line. He assured Cartwright that “the Camp will . . . certainly amply repay your looking after its interest.” The next month he renewed his request that any bonus be conditional upon the CPR setting a rate of $7.00 per ton for freight and treatment for Rossland ores.

A few days later Tom wrote to Thomas Shaughnessy, vice-president of the CPR, assuring him that he and his group favoured the CPR buyout of Heinze but again seeking assurance of a $7.00 per ton rate.63 The same day he wrote to federal minister of railways A.G. Blair to point out that the ownership group he headed had more “hard cash” invested in that country than did Heinze64 — over a million dollars. And they were prepared to invest even more money “if we receive any reasonable encouragement.”

In January 1898, frustrated at the lack of response from the government, Tom wrote to Sir Wilfrid Laurier personally. Unlike the typewritten letters to the others, this was a handwritten note on War Eagle stationery. He enclosed the other correspondence and ended with the following:

The American Smelter built at Northport to treat Rossland ores is offering better rates than either Heintze [sic] or the CPR. What does it profit the B.C. miner that the Govt spend millions on Branch lines in B.C. when American Roads and Smelters without State and Federal aid will offer us better terms than our own state-aided enterprises? It is obvious that the money has not been spent for the miner.

Laurier’s response makes it clear that Tom Blackstock was an important, influential man whose concerns were to be taken seriously. The prime minister assured Tom that he personally would be “very glad to see you any day that may be at your convenience.”

The negotiations must have gone well because in April 1898 the Gooderham–Blackstock syndicate bought another Rossland area mine, the Centre Star, and its associated mine, the Idaho, for $2 million. They incorporated the Centre Star Mining Company, Limited, with George Gooderham as titular president and Tom as vice-president to hold their interest. Shortly thereafter, in October 1898, they incorporated a sister company, the War Eagle Consolidated Mining and Development Company, to hold their other mining interests in the area. George Gooderham was listed as a director and Tom as president.

Mining was a labour-intensive endeavour and the hours were long and hard. Strikes pushing for an eight-hour work day were launched in other areas of the province in 1899 and 1900, part of a wider wave of labour unrest that was affecting railroads and mines in British Columbia and manufacturing in Ontario. In reaction the federal government adopted the Conciliation Act in 1900, trying to encourage conciliated settlements.

Then, in 1901, labour problems arose at Rossland. Tom telegraphed Laurier on 12 July saying, “Miners have struck at Rossland. Managers say quite useless attempt rebuild working force until fully protected. Will government guarantee protection before any overt act violence committed? If not, mines will have to close completely.”

Blackstock was asking Laurier to bring in the militia to protect any replacement workers. But he did not rely solely on government intervention. On behalf of the Gooderham–Blackstock syndicate he took legal action. The Trade Union Act, 1872 had granted workers immunity from being prosecuted for criminal conspiracy in combining in a union to improve working conditions. Nevertheless, employers were still able to bring a civil action alleging that workers were engaged in an unlawful conspiracy in restraint of trade or that the union was inducing workers to breach their contracts of employment. By October, Blackstock’s BC counsel had obtained an injunction against the union and had started a legal action in the name of each of their companies against the Western Federation of Miners (WFM) for damages suffered in the strike.

Laurier, recognizing the political sensitivity of the issue, referred the matter to his new Department of Labour and its recently appointed and quite young deputy minister, William Lyon Mackenzie King. King, as a former strike leader at the University of Toronto, was something of a social reform expert. He had done graduate work in industrial relations at Chicago, Harvard, and the London School of Economics and had authored several papers.69 He believed in conciliation, in listening to the two sides and, once fully informed, guiding them to a settlement. In doing so he relied upon the Conciliation Act. His goal was to get the workers back on the job; he encouraged management to address worker concerns and workers to return to work while he mediated a settlement. He came at his new role with sympathy for the working man and a desire to effect social change.

Nevertheless, when he personally travelled to Rossland, what he recorded in his diaries sounded much like what Tom Blackstock had been preaching: “All of Canada can learn from BC; the province speaks a note of warning in strongest terms against the dangers of labour democracy. Industry will be fettered and the source of wages and wealth left undeveloped, if change does not come. Where men without a stake rule those who have everything to lose, or at least at risk, the alarm is great.”

On his return to Ottawa, King came out against the strikers, or at least against those who defied the injunction to return to work. Again he confided his thoughts to his diary: “I have at least been fearless and honest in this exposé of Rossland proceedings . . . . It is the first time I have had to come out against the workingman and it pained me to do it, but if the cause is to prosper honesty must characterize it.”

One wonders if King was being completely honest with himself. Did it occur to him that he might have been prejudiced to some extent by his personal relationship with the lawyers of Beatty Blackstock? Did their defence of him at the 1895 Commission of Inquiry influence him to support Tom Blackstock?

The Rossland strike was an early sign that the world of business was changing and that from this point forward labour relations would be an important aspect of business and of business law. Tom Blackstock learned that lesson. Even after the strike was settled at the end of January 1902, War Eagle and Centre Star continued their legal actions for damages. He wanted a clear legal precedent — strikers were to be held liable for the damages they caused to their employers. The Centre Star case took two years but this Gooderham–Blackstock company won $12,500 in damages. The War Eagle then settled for $1,000 in the spring of 1905. By then the local chapter of WFM had gone bankrupt.

While these labour troubles were being dealt with, Tom petitioned the federal government to encourage the development of lead mining and smelting in British Columbia. He made “an urgent plea for a bounty on lead refining.”73 Although he was willing to accept limits on the amount, its duration, and the tonnage to which it would apply, he was confident that much benefit would accrue to other mining interests from such a policy. Laurier agreed.

As if Tom Blackstock did not have enough to worry about, his younger brother George was going from bad to worse. Following his divorce in 1898, he became quite unstable. Specialists in Toronto and in New York, including Dr. Daniel Clark of the Provincial Lunatic Asylum, suggested that he be committed. Eventually Tom went along with these recommendations, saying that his brother was to be lodged in a mental institution “out of which he cannot come for a period of years unless cured and until then I do not wish to hear more about him for I am wearied beyond expression by the whole business.”