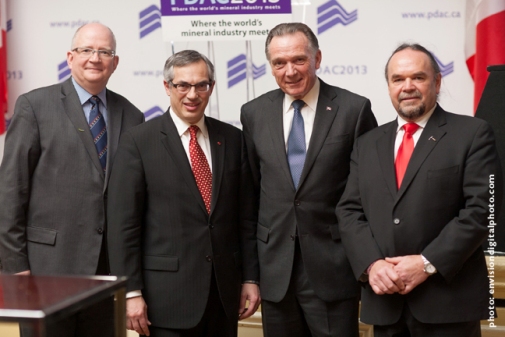 Like every region where mines have been developed across Canada and around the world, this
part of Northern Ontario is unique.Its marshy wetlands have been home to First Nations
for thousands of years. And their communities and their experience are unique to them.And
it is incumbent upon the mining industry to understand those circumstances, engage those
communities and be able to appreciate their perspective. (Federal Minister Tony Clement
– PDAC March 2013)

Thank you for that kind introduction and good evening. It’s a pleasure to join you here today at the start of Canada’s premier mining conference. In fact, this event is recognized right across the globe and for good reason.

With over 30,000 visitors expected to attend from 125 countries, the conference clearly demonstrates the importance of the sector to the global economy, but it also highlights Canada’s role as a world leader in mining innovation, technology and responsible environmental stewardship.

First, I wish to thank the organizers of the Prospectors and Developers Association of Canada for inviting me and for providing me this opportunity to speak with you this evening.

This is an exciting and momentous time for mining in Canada, and especially so in a region I hold dear, Northern Ontario.
The Ring of Fire has been talked about extensively for the past several years. It’s sheer size and scale has ignited the imagination of intrepid miners and fuelled hope and excitement in cities and towns across Northern Ontario.

And to be honest, it has also prompted questions and concerns in remote communities where mining is still a relative unknown.

The Ring of Fire is no ordinary mining development. It’s not one mine. Rather it’s a vast resource-rich region in the James Bay Lowlands spanning 5,000 sq km with significant deposits of nickel, copper and chromite.

In fact it holds the largest deposits of chromite, which is the main ingredient in stainless steel, in North America.
And true to the storied traditions of great finds like the Klondike, the promise of mineral bounty has brought daring miners from far and wide to this remote region.

In fact, to date there are 30,000 claims covering the area. Some 30 companies are actively exploring the muskeg and bogs of the Lowlands, spending some $80-million to discover the riches that lie beneath.

And what they have found is pretty impressive. The Ring of Fire, very simply, is potentially the biggest mining development Northern Ontario has ever seen.

And for anyone who is familiar with Northern Ontario’s impressive mining history, that is saying a lot.

The region is estimated to contain between $30 to $50 billion worth of minerals – enough to be mined for several decades.
In terms of jobs, that translates into potentially over 5,000 direct and indirect positions in Northern Ontario alone, plus significant spinoff benefits throughout the province.

As I said, this is no ordinary mine development.

This is a generational opportunity to materially improve the economic prospects and quality of life for thousands.
The sheer size of the Ring of Fire means the ripple effect from the wealth it generates will be felt far beyond the Ring itself and even Ontario.

But before we can move forward and realize that potential, there is something we cannot forget.

Every geologist and miner worth his salt knows that you have to get a proper lay of the land if you are going to strike that elusive vein.

But that goes just as much for the people living on the land as the geology below it.

Like every region where mines have been developed across Canada and around the world, this part of Northern Ontario is unique.

Its marshy wetlands have been home to First Nations for thousands of years. And their communities and their experience are unique to them.

And it is incumbent upon the mining industry to understand those circumstances, engage those communities and be able to appreciate their perspective.

And the mining industry can also share its own story. A story that has brought jobs, growth and prosperity to many regions of Canada and the world.

Much of Canada’s wealth is founded on mining, from Sudbury and Kirkland Lake here in Ontario, to Flin Flon Manitoba, gold mines in Quebec, Newfoundland iron ore and potash in Saskatchewan.

The mining industry has a great story to tell. It has an opportunity to leave a lasting legacy of economic benefit to a remote region first visited by fur traders centuries ago.

That’s not to say this will be easy.

This is a complex undertaking; there is no doubt about it.

In addition to our First Nation partners, there are many stakeholders and many challenges to overcome, including infrastructure and environmental considerations.

Our Government understands that. And I am here today to say that we will do our part to help move this development forward.

That is why the Prime Minister recently asked me to coordinate and lead the federal Government’s engagement on this file.

From our Government’s perspective, I believe it is incumbent upon us to bring a whole-of-government approach to this process.

And that will be part of my job as Federal Lead. I will work in coordination with my colleagues at Aboriginal Affairs, at Industry, at Natural Resources and at 12 other federal departments, to ensure we speak with a single voice when we dialogue.

This collaborative approach will ensure we maximize investments, avoid duplication and work efficiently with stakeholders and partners, including the Government of Ontario, in addressing development challenges

There is a lot at stake and we cannot afford to allow this development to stall and become mired in paralysis and uncertainty.

We can’t let this opportunity pass us by.

In my position as the longest-serving Minister for FedNor, the Government of Canada’s economic development organization for Northern Ontario, I can see that the potential of this development for the region is unparalleled.

And, part of the reason I am here today is to reach out to key stakeholders, including many of you and others in the mining industry, to ensure the Ring of Fire development proceeds to everyone’s benefit.

Just recently, I met with representatives of the Matawa First Nations during a visit to Thunder Bay.

It was a very positive meeting. It was a first step, but I can assure you that I am fully committed to working closely with these communities in the coming months and years, reaffirming our Government’s commitment to collaborative and responsible resource development.

Our Government will also be working closely with all partners to ensure the process moves forward in a collaborative and cohesive manner.

Let me be clear on this: The Ring of Fire represents a once-in-a-lifetime opportunity to create jobs, and generate growth and long-term prosperity for Northern Ontario and the country.

We need to do this right. And we need to move forward now.

Thank you for inviting me today and I hope you all have a great conference.