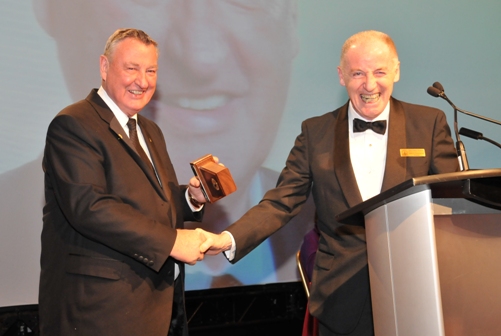 James O’Rourke began his career as a mining engineer working on a new generation of mines being developed by visionary industry leaders during the expansionary post-war decades. This rare experience set the stage for a successful career as a mine-maker, company builder and advocate of progressive industry partnerships. He exemplifies the optimistic spirit of his native British Columbia, where he played leadership roles in the development of the Quinsam coal mine, the Cassiar asbestos mine, the Huckleberry copper mine, and the Similco copper mine, later revived and expanded as Copper Mountain, among other endeavors.

In addition to building companies such as Princeton Mining and Copper Mountain Mining Corporation, he forged strong partnerships with Pacific Rim trading partners, setting a precedent for other companies and industries to follow as part of the Pacific Gateway initiative.

Born in Prince George, O’Rourke earned a B.A. Sc. Degree in mine engineering from the University of British Columbia in 1964 before joining Placer Development, then under the leadership of the legendary John Simpson. During the next 14 years he was involved in the start-up phase of five mines starting his mining career at Craigmont — the first large integrated
open-pit mine in western Canada and the first to introduce sub-level caving — and moving directly to the start-up of Endako molybdenum mine followed by the challenging Marcopper mine built on a remote island in the Philippines.

Returning to British Columbia in the early 70’s he was involved with the start of the Gibraltar open-pit copper mine. He then joined Brinco and led development of the Quinsam coal mine on Vancouver Island, before ushering in a new career phase as president of Princeton Mining Corporation.

O’Rourke turned his attention to past-producing mines, including Cassiar, which he revived for several years with the transition from an open pit to a block-cave underground mine. In 1988, he acquired the historic Similco open-pit copper mine near Princeton, which operated until 1996. O’Rourke also spearheaded the Huckleberry copper project near Houston, which he advanced through the feasibility and construction stages to production. Mitsubishi Mining Corporation and three other Japanese companies invested in the $140-million open-pit copper mine, which began operations in 1997, with an expected life until 2021.

As metal prices improved driven by demand from China and other emerging economies, O’Rourke seized the opportunity to re-acquire Similco in late 2006. He formed Copper Mountain Mining and assembled an experienced team, including former associates, to revive the project as Copper Mountain. Mitsubishi again came onboard, this time as a 25% partner, and arranged needed debt financing.

Copper Mountain was officially re-opened as a $438-milllion, 35,000-tonne-per-day mine in August, 2011. It employs 360 people and has a projected life of 17 years. In addition to building mines and companies, O’Rourke has built strong relationships with First Nations and contributed to community initiatives near his mining projects. He is a founder of the
“Mining for Miracles” campaign, which has raised more than $20 million for the BC Children’s Hospital since 1988. He is a 2011 recipient of the Order of British Columbia, and has won many awards over the years, including the prestigious Edgar A. Scholz Medal for excellence in mine development in 2005.