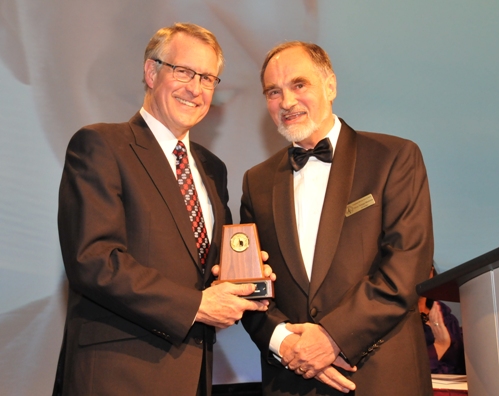 When Gerald Grandey joined Cameco Corporation in 1993, his mandate as senior vice-president of marketing and corporate development was to help the company grow beyond its core Rabbit Lake and Key Lake uranium mines in Saskatchewan. He rose to that challenge and many others after becoming president and CEO in the early 2000s. When he retired in 2011, Cameco accounted for 16% of the world’s uranium with five mines in Canada, the United States and Kazakhstan, and was an integrated nuclear energy company.

But Grandey did more than expand production and increase market capitalization by 350% to $9.6 billion from $2.1 billion. He helped Cameco become Canada’s largest industrial employer of Aboriginal people and a world leader in nuclear safety, played a pivotal role in a global nuclear disarmament agreement, and raised the profile of nuclear power as clean energy.

Grandey ironically began his law career in the 1970s by opposing the licensing of nuclear plants in the Great Lakes region of his native US, later some of Cameco’s best customers. His views changed as he learned about the industry and its potential benefits for the world. He understood the underlying science and technology, having earned a degree in geophysical engineering from the Colorado School of Mines in 1968. In 1978, Grandey joined Denver-based Energy Fuels Corporation and helped to transform it from a small uranium producer into the largest U.S. producer.

When Bernard Michel recruited Grandey as a critical member of his team in the 1990s, Cameco was developing the challenging Kumtor gold project in Kyrgyzstan. Led by Grandey, newly listed Centerra Gold raised $871 million in 2004 to operate Kumtor and hold other goldassets, enabling Cameco to focus on its core business.

Grandey played a leadership role in the successful negotiation of the Highly Enriched Uranium agreement, aimed at dismantling Russian nuclear weapons and securely transferring the displaced uranium for the production of electricity at western nuclear power plants. This complex multi-party agreement was a transformative political achievement that elevated the credibility of Cameco and Canada on the world stage.

It was also a commercial success implemented without market disruption. In 2011, Grandey was appointed Chairman Emeritus of the World Nuclear Association in recognition of his career achievements and contribution to the peaceful use of nuclear energy. Among other awards, he received Saskatchewan’s Centennial Medal in 2005, a tribute to his community involvement, advocacy of corporate social responsibility, and impressive track record of providing employment and business opportunities for Aboriginal people of the province.