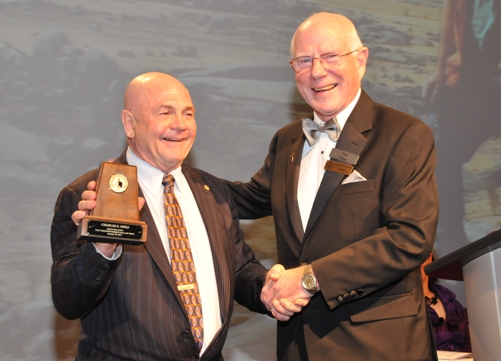 Geologists and prospectors had searched for diamond deposits in North America for more than a century with only teasing hints of success until the discovery of a cluster of kimberlites in the Northwest Territories that became Ekati, Canada’s first diamond mine. This groundbreaking discovery, synonymous with the name of Charles E. (Chuck) Fipke, was the culmination of Fipke’s relentless pursuit of elusive diamond indicator minerals for hundreds of kilometres from the Mackenzie River Valley eastward to their source near Lac de Gras.

Other key contributors in his quest were his associate, geologist Stewart Blusson, economic geologist Hugo Dummett and University of Cape Town professor John Gurney. The epic success of this discovery, achieved on a shoestring budget through innovative science, sparked a staking rush, inspired other diamond discoveries and created a new industry for Canada.

Born in Edmonton, Alberta, Fipke earned a BSc degree in geology from the University of British Columbia in 1970. His adventurous nature took him to Papua New Guinea, South Africa, Brazil and other exotic locales where he worked for senior companies such as Kennecott and Cominco and became intrigued with the use of heavy mineral geochemistry as an exploration tool.

Fipke opened Kelowna-based CF Mineral Research to specialize in heavy mineral processing and analysis in 1977, and later managed a diamond exploration program for Superior Oil that ultimately led to Canada’s North. After Superior withdrew from the venture in 1982, Fipke and Blusson continued the search, forming Dia Met Minerals in 1984. They were among the few Canadian geologists to understand the significance of indicator minerals associated with diamond-bearing kimberlites
and how they can be traced back to their source. This was no easy task in the North, where mineral trains were transported great distances by glacial activity.

Fipke persevered and found evidence of diamond-bearing kimberlites near Lac de Gras. His success led Dia Met to a business deal with Dummett’s employer, BHP Minerals, in 1990, with the partners reporting their first diamond discovery in 1991. This event sparked a massive staking rush that led to several other discoveries in the region.

The official opening of the Ekati mine in 1998 was a transformative event as it established Canada as the third largest producer by value of high quality diamonds and laid the foundation for a progressive new industry employing thousands of Aboriginal people and northerners.

Fipke also contributed to the growth of the industry by publishing the first guide to diamond exploration using indicator mineral geochemistry. He remains active in mineral exploration among other endeavors. In 2006, he established the Charles Fipke Centre for Innovative Research at UBC Okanagan, and the WildAid Canada Foundation to protect endangered species in 2009.

In addition to an honorary Doctorate of Technology from Okanagan University College, Fipke has received many awards for his achievements, notably Mining Man of the Year (1992), Prospector of the Year (1992), the H.H. “Spud” Huestis Award (1997), the Daniel C. Jackling Award (2004) and the Robert M. Dreyer Award (2005).