January 24, 2013 in Books, Art, Music and Photography About Mining and Northern Topics, Coal 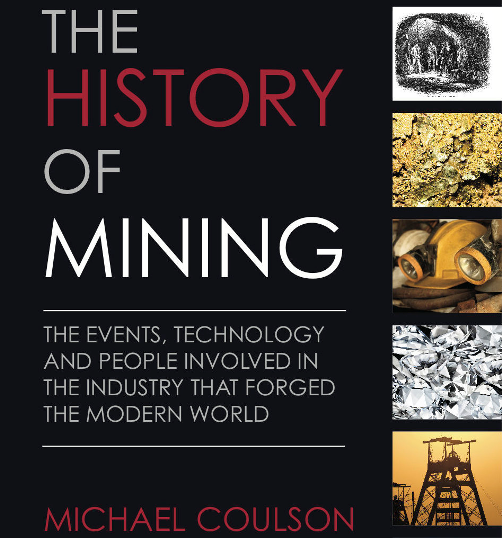 The first nation to fully embrace the Industrial Revolution was Great Britain, the leading military power in the world at the start of the 19th century, and also a leader in industrial innovation. However, coal had been mined in Britain since, and possibly even before, the coming of the Romans in the 1st century. Originally it had been used in fires and forges for working metal, a role that it had held for many centuries in other parts of the world.

Mining in these earlier times was quite crude, favouring surface accumulations of coal, and when these were exhausted shallow drifts would be driven into the coal to allow mineworkers to mine it at shallow depth. As long as the British economy remained primarily agrarian, the use of coal was not widespread. Gradually, a number of significant engineering advances stimulated interest in coal mining and provided the Industrial Revolution with the means to materially quicken the pace of development.

Coal and the invention of machines, to both improve coal mining and to utilise the power that coal could generate, drove the early decades of the Industrial Revolution. Thomas Savery and Thomas Newcomen were credited with inventing the steam engine in the 18th century, which allowed pumping to take place in the mines to remove water as coal mining moved to new depths. It was, however, James Watt who refined the steam engine so it became more efficient and reliable and importantly more powerful, so it could drive production in the new factories that Richard Arkwright had introduced to the textile industry.

As the Industrial Revolution gathered pace, other activities were swept up in the advance of technology. One of the most significant beneficiaries of the invention of the steam engine was transport, which up until then had largely used barges, coaches and farm carts. George Stephenson’s Rocket changed everything, ushering in the era of steam engines, which led to the building of railways, first in Britain and then around the world. It also revolutionised travel and commerce by sea, providing reliable and fast passage for ships and thereby slashing sailing times and stimulating trade. The fuel all these inventions used for power was, of course, coal and amongst the earlier British coal barons was Thomas Powell.

Britain’s position as the birthplace of the Industrial Revolution was in part due to the development of its coal mining industry. One of the most foresighted of the coal owners was Thomas Powell, who was born in Chepstow, in southeast Wales, in 1779. His father, a timber merchant, died when he was 14 and Powell took over the business, despite his youth, in order to support his mother.

The timber business did not provide a secure living for Powell and his mother so he began to explore other possibilities and he alighted on coal in South Wales, finding it to be an abundant, but hardly developed, source of fuel. Powell decided that the invention of steam-driven machinery in the latter part of the 18th century was a revolutionary event and that coal was the fuel that would drive the machinery of industrialisation.

Therefore, in 1810 he bought his first coal lease at Llanhilleth and with two others worked the coal seam on the property, gaining first hand experience of coal mining techniques and conditions. Over the next 20 years Powell bought other leases and developed mines but coal’s advance, though perceptible, was slow and Powell almost went under. He persisted though and bought more coal seams around Newport and in the nearby valleys. A ruthless operator, he once had to pay damages for undermining a neighbouring coal lease without agreement.

By 1830 Powell was through the woods and as demand for coal, spurred by accelerating industrialisation, rose sharply he began to be seen in South Wales as a shrewd and successful businessman whose vision for the black fuel had begun to pay off handsomely. Powell’s Welsh coal was of the highest quality and his mines were conveniently located for the canal system and shipment to markets in the UK and France. Already strong in the south, the lifting of internal shipment restrictions in 1834 opened up the fast-growing industrial regions of the north for Powell, where he undercut northern coal owners; a sign of his increasingly aggressive business tactics, which started with a failed attempt to create a coal price cartel, the Newport Coal Association in 1833.

He also began to invest in transport in order to control the shipment routes to his UK markets and also was a major investor in the Taft Valley Railway, which linked Newport with England. Entering his sixties, Powell opened his two biggest mines in Aberdare, Tir-founder and Mountain Ash in 1842, thereby making him the largest coal producer in the world at the time.

He now had business interests covering banking as well as coal and transport and in 1863, appreciating that the day of the larger-than-life coal owner had past, he decided to secure the future of his Welsh coal empire by merging his companies with those of another coal owner, Sir George Elliot. The company, Powell Duffryn Steam Coal, became a public company in 1864 just after Powell’s death; the eight collieries in the group produced 400,000 tonnes of coal annually. In the following 50 years output soared in line with industrialisation and economic growth.

Whilst there can be no arguments about Powell’s achievements in building his coal empire and providing the fuel for the new industries, his record as an employer was poor and his ruthless approach to operating his collieries and unsafe operating methods made him no friends amongst his workforce. He faced a number of strikes in the 1850s as workforce unrest grew; one followed a dispute over a 15% wage cut Powell was demanding. He brought in English ‘scab’ labour, broke the strike and then cut his Welsh miners’ wages by a further 5% when they returned to work.

Despite his ruthless drive, Powell was a family man; he had three wives and it was his third wife, Anne, whom he married in 1833, who bore his five children – two daughters and three sons. In 1860 Powell built the Manor House at Coldra Woods outside Newport, which he gave to his son Thomas when he got married. The house is now part of the Celtic Manor Resort where golf’s Ryder Cup was held in 2010.

Thomas and Powell’s other two sons, Henry and Walter, took over the running of Powell Duffryn on their father’s death in 1864. Tragedy, however, was just round the corner. In 1869 Thomas Powell and his wife Julia were on safari in Abyssinia (Ethiopia) when they were murdered. In 1881 Walter Powell, a Conservative MP, went missing, presumed drowned, when hot air ballooning over southern England. It is likely that many a grieving Welsh miner’s family, suffering the loss of a breadwinner due to Powell’s indifference to proper safety, will have viewed these two tragedies as some sort of rough justice for their own loss.