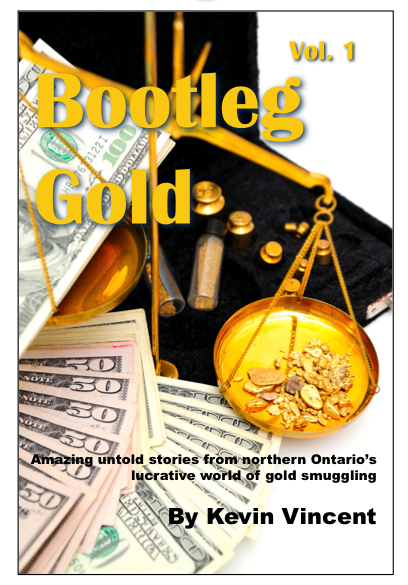 “Is my Dad in your book? You didn’t mention my grandfather by any chance did ya’? Is ‘you-know-who’ in the book?” As a writer, if you live in a gold mining town, and it becomes common knowledge that you’re writing a book about highgrading, which is basically the theft of gold from a mine, as well as long-forgotten gold robberies, almost everyone will approach you with a story to share.

Timmins, Ontario is such a town. There are others, such as Sidney, Nevada, Dawson Creek, Yukon, and Forbes, Australia. The same stories are heard in hundreds of towns and villages across Africa, dozens of communities in California, Colorado, Alaska, Québec and even the state of Idaho where the first thing that leaps to mind is potatoes, not gold.

Curiously, everyone wants to see their family name in print – not their own name, they’d prefer to see their uncle’s name or their great-grandfather’s name. It’s an unofficial badge of honour – one where “sticking it to the man” – in this case, multinational gold mines – was justified, and almost bordered, somehow on righteous.

None of these many people who approach the writer were ever personally involved in high-grading, of course, but they happen to know someone who, (wink wink, nudge nudge) just might have been “involved.”

Bootleg Gold is a lot of things, but I can tell you what it is not. It is not an exposé of the myriad names of individuals known in gold smuggling circles, both domestically and abroad, as being “key players” or goldlords as I’ll call them.

However, that standard does not apply to individuals who were caught, charged and convicted, or in the case of several highprofile and prolific alleged gold thieves, acquitted.

Some might wonder what can be written about gold that hasn’t been said a million times already. To those, I suggest a trip to your local library or a search of the internet, where there are hundreds of fascinating stories in which the central theme is gold.

There are extraordinary tales, many dating back centuries, of men and women who put their sedentary lives on hold, trading comfort for mortal danger as they undertook the intoxicating pursuit of the most precious of metals.

There are accounts that describe how, for thousands of years, an endless stream of kings and kingdoms have used gold to both shape and glorify their legacies.

But what hasn’t been available, until now, is a detailed narrative of an equally ancient and equally dubious practice. There has been precious little written about the modern art of gold smuggling, the illegal practice of moving gold from one owner or one country to another, and as one smuggler told me, to “anywhere there was a bottle of whiskey and a willing member of the opposite sex.”

To this day, the shadowy world of gold smuggling is connected with tax evasion, money laundering, drug smuggling, and a host of other crimes that run the gamut from petty extortion to genocide and the secretive world of the U.S. Central Intelligence Agency.

As the cover of this book suggests, theft from the workplace is not uncommon. For hundreds of gold mines and those who work in them, highgrading can literally mean life or death.

In the mine’s case, it can mean early closure, if security is lax. In the case of the miners, operating outside of the acceptable ‘rules of engagement’ would often lead to harsh consequences, even death.

As a form of exchange, gold is still the most widely recognized currency around the world. Indeed, many economists and pundits believe that gold and silver are the only true form of currency. It can be used to buy goods and services or kept in a safe location for emergencies.

Speculators will buy it on both the open and black markets at low prices in anticipation of a spike in its value. Millions of people around the world, often for good reason, distrust their banking institutions – they distrust paper money – and they see gold as a hedge against inflation or bad economic times.

In India, and in many Muslim nations around the world, the practice of bequeathing gold as a gift at special events such as birthdays and weddings is part of the local culture.

Indian women have come to expect the gift of gold as a form of insurance against a life of poverty in the event they are faced with divorce.

During the first Gulf War, ordinary Iraqis were being heavily affected by sanctions to the point of starvation.

Newspapers in England and the rest of Europe as well as North America reported Iraqi nationals were selling their meager gold possessions in order to buy food.

More affluent Iraqis would smuggle gold out of the country, exchanging it for essential goods, which they in turn resold at a heavy markup on the black market.

It is said that the poor will stockpile gold during good economic conditions and sell it when things turn bad. The rich do the opposite – they turn to gold in the face of crisis and sell when things settle down, taking advantage of the market swings.