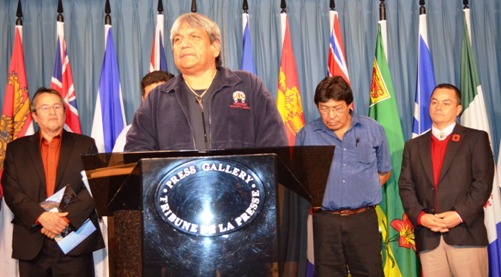 A. Article 32 of the United Nations Declaration on the Rights of Indigenous Peoples states that “1. Indigenous peoples have the right to determine and develop priorities and strategies for the development or use of their lands or territories and other resources; 2. States shall consult and cooperate in good faith with the indigenous peoples concerned through their own representative institutions in order to obtain their free and informed consent prior to the approval of any project affecting their lands or territories and other resources, particularly in connection with the development, utilization or exploitation of mineral, water or other resources; 3. States shall provide effective mechanisms for just and fair redress for any such activities, and appropriate measures shall be taken to mitigate adverse environmental, economic, social, cultural or spiritual impact”.

B. In July 2011, the nine Matawa First Nations signed by unanimous consensus the “Mamow Wecheekapawetahteewiin”, a Unity Declaration agreeing to work together to assert the free, prior and informed consent (FPIC) standard in the Ring of Fire.

C. The Government of Ontario has been operating under the assumption that projects in the Ring of Fire have received the FPIC of the Matawa First Nations and have proceeded with an Agreement-in-Principle with a mining proponent (Cliffs Natural Resources, an American transnational mining company) regarding the location of a $3.2 billion ferrochrome production and refining facility outside of the Nishnawbe Aski Nation (NAN) First Nation Treaty area, including initial capital investments.

D. The Government of Canada is proceeding with the Comprehensive Environmental Assessment Study, despite Matawa First Nations’ filing a Judicial Review Application against it in November 2011.

E. Ontario and Canada stand to make hundreds of millions of dollars in revenues on the projected $1.4 billion in annual gross revenues the Cliffs mine will generate over 30 or more years.

F. The Matawa First Nations Council expressed concerns about the proposed construction of a permanent road opening up their remote region and the untold environmental and social effects on their land, communities, and waters, including the change in water flows in the Attawapiskat watershed and potential for toxic acid mine drainage.

G. On June 20, 2012, the Matawa First Nations Council passed a Resolution calling for a pause and putting forth the position that the Ring of Fire “will only proceed after their communities have participated in a full and thorough environmental review of all of the proposed mines, refinery, roads and infrastructure and after fully informing themselves and having negotiated appropriate terms and conditions that will protect the land, waters and sustainability of their way of life and then freely consent to the project”.

H. The Matawa First Nations Council also placed an “immediate moratorium on all mining exploration and development, government permits, infrastructure projects, transportation corridors, transmission lines, baseline studies, archaeological screening and any and all other land-based activities in the Ring of Fire unless, and until, Ontario and Canada come to a government-to-government table with a mandate to negotiate fundamental questions of First Nations jurisdiction, a trilateral environmental assessment process and real resource benefits and revenue sharing for our First Nation”.

I. On June 22, 2012, 6 Matawa First Nations announced that they are in the final stages of issuing a 30-day eviction notes to all mining companies with exploration and development camps in the Ring of Fire.

THEREFORE BE IT RESOLVED that the Chiefs-in-Assembly:

1. Support the free, prior and informed consent (FPIC) position taken by the Matawa First Nations on the moratorium and the eviction of mining companies in the area known as the Ring of Fire.

2. Demand that Canada, Ontario and industry engage the Matawa First Nations in a process that is grounded on the rights to provide FPIC prior to any further development in the area known as the Ring of Fire.

3. Direct the AFN Executive Committee to support the Matawa First Nations where requested and to provide a report