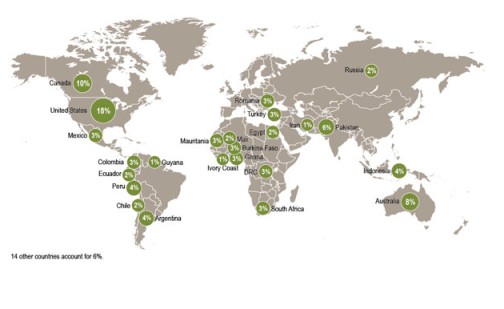 Strategies for Gold Reserves Replacement: The Costs of Finding and Acquiring Gold

Halifax, Nova Scotia, July 17, 2012 – Metals Economics Group’s (MEG) recently released study, Strategies for Gold Reserves Replacement: The Costs of Finding and Acquiring Gold, reports that 99 significant gold discoveries (defined as a deposit containing at least 2 million oz of gold) have been reported so far in the 1997-2011 period, containing 743 million oz of gold in reserves, resources, and past production as of year-end 2011. Assuming a 75% resource-conversion rate and a 90% recovery rate during production, these 99 discoveries could potentially replace only 56% of the estimated gold mined during the same period, if they are economical to mine. Then again, the economic viability of the discovered gold relies to a large extent on location, politics, capital and operating costs, and market conditions, which will inevitably further reduce the amount of resources that will reach production.

The Americas hold the greatest share of gold in these discoveries—not surprising given that the Americas have accounted for more than half the industry’s discovery-oriented gold exploration spending during the period. Overall, reserves and resources in the 99 discoveries only account for about 18% of all reserves and resources in the world’s currently producing mines and developing projects, indicating that most of the industry’s exploration-derived gold has been added through brownfields work and exploration at older, known deposits.

Over the past decade, the top 26 global gold producers (those that mined at least 600,000 oz of gold in 2011) collectively replaced almost 208% of the gold they produced. Individually, 21 of these major producers added enough reserves through exploration and acquisitions to keep ahead of production, maintaining a strong pipeline of projects to insure stable or increased gold production.

The major gold producers increased their aggregate annual production 17% over the past ten years to 46.4 million oz—57% of 2011 world mine production—and as of year-end 2011 these companies held sufficient reserves for 21 years of production at their 2011 rate. However, increasing production exacerbates the need to replace reserves, and most major producers forecast further production increases in the coming years that could increase the group’s share of the projected world mined total to 67% by 2017. Based on their 2011 production, each major producer already needs to replace an average of almost 2 million oz of gold in reserves each year, ranging from almost 8.5 million oz/y to less than 700,000 oz/y after factoring for recovery losses.

Just 14 of the 26 major gold producers made major gold discoveries between 1997 and 2011, accounting for about a quarter of the 743 million oz found. Today, the major producers and their majority-owned subsidiaries hold 39% of the reserves and resources in the 99 significant discoveries made in the past 15 years (having increased their share through acquisitions), which, after conversion to reserves and recovery losses, could amount to just 46% of the gold needed to replace their production from 2002 to 2011.

Despite the apparent shortfall in new discoveries, the biggest reserves replacement challenge faced by the major producers and the industry as a whole is not that there is no gold left, but that all the “easy” gold has been found. Worldwide, the total gold in reserves and resources at development-stage projects is essentially equal to that in currently producing mines.  However, with increasing risk of political, regulatory, and tax instability in many resource-rich nations, declining grades, rising costs, and dramatically longer development times, the amount of gold available for production in the near term is likely far less than has been found.

MEG’s Gold Reserves Replacement Strategies study addresses key growth strategy issues facing the gold mining industry and compares the relative costs per ounce of discovering or acquiring gold in the ground.  The study provides an industrywide review of the gold pipeline, acquisition activity, gold exploration spending, and major discovery successes, and a variety of metrics for measuring and comparing the relative costs of various growth strategies for the 26 largest gold miners and the industry as a whole. In addition, the study looks in detail at key industry indicators, such as the increasing time from discovery to production, the continuing decline in headgrades and reserves grades, and the ongoing trend of rising capital and operating costs.