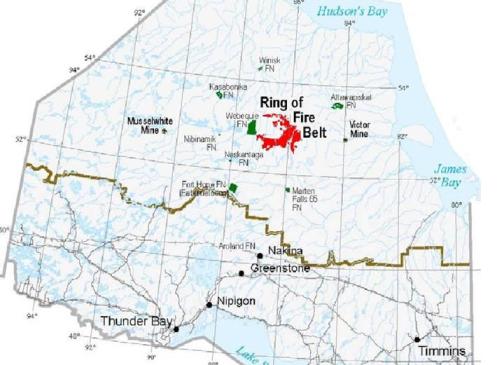 Stan Sudol is a Toronto-based communications consultant, speechwriter and columnist who blogs at www.republicofmining.com  [email protected]

On May 9th Cliffs Natural Resources announced that the company was advancing its massive $3.2 billion chromite project in the isolated and infrastructure-challenge Ring of Fire region to the feasibility stage. Sudbury was selected as the best location for the proposed $1.8 billion smelter for a wide range of reasons including rail, transportation, power supply and skilled workforce.

If you think that such a positive announcement should bring collective cheers across the north and an economically imploding southern Ontario, you would be wrong. The ensuing flurry of anguished and angry news releases from First Nations, environmental organizations, and some politicians was enough to make any reader despair that the Ring of Fire will ever be developed!

First some essential background info before I continue. Discovered in 2007, the Ring of Fire mining camp, located 540 kilometres northeast of Thunder Bay, in the James Bay lowlands, will probably go down in the history books as one of the most significant Canadian mineral finds of the past century. It is estimated that the chromite deposits are so large that we could be mining up there for the next hundred years and that the total mineral potential of the region – chromite, nickel, copper, PGMs, vanadium, gold – could easily exceed the legendary trillion-dollar Sudbury basin!

The Ring of Fire was named by two of the five people credited for its discovery – Richard Nemis and John Harvey – and Rob Cudney, CEO of Northfield Capital, an investment company. Over dinner one night, the three came up with the catchy name which is partly based on the circular geology of the region and an enthusiasm for Johnny Cash. The other three discovers of the Ring of Fire are Mac Watson, Neil Novack and Don Hoy.

Chromium is one of the most important industrial metals and there is no substitute for its unique properties. It is used for aircraft engine alloys, consumer product plating and specialty stainless steels and superalloys. Like nickel, there are many critical military uses and it is in the best interest of the powerful American military/industry complex that a large strategic deposit is developed in a politically secure part of the globe.

The major concern about chromite is about the reliability of the three top producers which are South Africa, Kazakhstan and India. They accounting for almost 80% of world production. By far, South Africa is the largest producer supplying almost half of global chromium output. Due to its own rapid growth, India is starting to limit exports. Both South Africa and Kazakhstan have political stability issues making the high-quality chromite deposits in Ontario enormously attractive.

There is also continuing debate in South Africa about limiting the export of large quantities of chromite ore to China for refining and the ensuing loss of jobs. South Africa does process much of it ore inside the country but power limitations and costs are a concern. And Ontario politicians need to consider the long-term competition between the west, China and other developing countries for increasingly scarce mineral resources and ensure the province makes the best economic use of this discovery.

The Ring of Fire is surrounded by First Nations communities in Treaty Area # 9. All of northern Ontario above the Mattawa and French Rivers – the traditional dividing line between Ontario’s north and south – are covered by the following five treaties: Robinson-Huron, Robinson-Superior, Treaty #3, Treaty #5 and Treaty #9.

Except for the Riel Rebellion and some other small conflicts, Canada, unlike our American neighbours, did not go to war and conquer “Indian” territory. In northern Ontario and the rest of western Canada, except for large parts of B.C., the use and settlement of this vast land was negotiated by Treaties which are signed international agreements between nations. In contrast, Quebec was a conquered territory, by the British, on the Plains of Abraham in 1759.

In return, the Crown was supposed to meet certain obligations regarding education and welfare. In 1982, these existing Aboriginal treaty rights were “recognized and affirmed” in Section 35 of the Canadian Charter of Rights and Freedoms. Since then, the Supreme Court of Canada has almost consistently interpreted the “original intent” of these treaties as “sharing the land, not giving it up” and has ruled in favour of First Nations in many subsequent legal battles over land use and the requirement to be adequately consulted on resource development.

Without a doubt, any visit to an Aboriginal reserve, especially in the Far North clearly shows that the enormous resource wealth of the north – that for much of our history flowed to southern Ontario’s non-Aboriginal society – did not benefit First Nation communities. For over 150 years, since the first treaties were signed in northern Ontario, the Crown has repeatedly not lived up to their obligations. This historical legacy of mistrust – the proverbial “sins of our great-grandfathers” – significantly impacts First Nations expectations and negotiations in the Ring of Fire, especially with both levels of Government.

The first major issue was the awarding of the ferrochrome smelter to Sudbury instead of Greenstone in the Northwest. First Nations communities surrounding the Ring of Fire – Webequie being the one exception – are incensed that they were not consulted about this decision. Aroland First Nation Chief Sonny Gagnon has stubbornly insisted that the ferrochrome facility should be in the same region as the mines. No one can deny that northwestern Ontario has economically suffered much more than the northeast.

Many still feel that the province missed a great opportunity to not only to redress the decline in the Greenstone area but also win the support of the surrounding First Nations. While the Cliffs $1.8 billion ferrochrome facility is private sector money, Ontario will be subsidizing power for this facility – quite rightly, as Quebec gives massive power subsidies to the aluminum refineries in that province – for decades to come. That should give the province some clout in the ultimate location of the refinery.

The NDP are having a field day highlighting the fact that Cliffs intends to ship about 40% of the raw material to foreign markets – most likely China – for processing, even though that was in the initial plan to help make this massive project economical. Furthermore, Xstrata Nickel has been shipping semi-processed nickel/copper to its Norway refinery since the 1930s, while Vale has been refining out-of-province and/or country nickel ore at their Sudbury and Thompson refineries for decades.

However, in an increasingly resource-starved world, the Government of Ontario does have more leverage and we need to as if it should demand that more if not all of the chromite be processed in this province? I sincerely appreciate Cliffs $3.2 billion potential investment in this province. And I don’t want to sound like some 1970s left-wing nationalist, but the resources in the ground belong to all the people of Ontario, non-Aboriginal and Aboriginal, and I worry that in our rush to develop this rare elephant deposit – in mining circles, this is a truly extraordinary and rare find – the hardworking taxpayers and our bankrupt provincial government will not get the maximum benefit that they could?

Let’s not forget Newfoundland’s epic David and Goliath battle with Inco in which the permits for the Voisey’s Bay nickel deposit were not given until the company committed to refining all that ore in the province. And more recently, Saskatchewan’s right-leaning, pro-mining government opposed the sale of Potash Corp. to a foreign miner. Government intervention in massive resource development projects is not necessarily bad.

The Conservatives have been huffing and puffing about confidential negotiations and lack of transparency. What major project is ever negotiated in public? Earlier this year, to score a few partisan political points, an enormous “kerfuffle” was made by North Bay Conservative MPP Vic Fedelli about the fact that Dr. Christine Kaszycki, the coordinator of the Ring of Fire Secretariat and well-respected geologist had not yet visited the Cliffs or Noront drilling sites. Instead of picking on a defenseless civil servant, why doesn’t he stick to sound policy criticism directed at the Premier and his government?

Conservative leader Tim Hudak recently angered many in the mining sector – including this writer – by comparing the Ring of Fire to the Alberta oil sands. Regardless that he was referring to the positive economic impact, his strategic ineptitude was akin to waving a red flag in front of the south’s powerful environmental movement. Most southerners know very little of mining and are generally very uncomfortable with the images from northern Alberta of ravaged landscapes, toxic waste ponds and dying ducks.

Mining in northern Ontario, whether it is open pit or underground is not remotely similar to the oil sands developments. The ecological footprints of the Cliffs Natural Resources open pit chromite project and Noront Resources nickel/copper/PGM underground mine – the other proposed development in the Ring of Fire – will be very small and environmentally sustainable.
The conservatives also continue to criticize the Premier about how slowly this project is advancing. I am not enthusiastic about defending McGuinty but the opposition has no merit on this issue.

The Premier has publicly committed to the project and understands that the Ring of Fire is desperately needed for Ontario’s anemic economy. And the opposition – contently howling for blood like werewolves during a full moon – should realize that a project of this size that needs basic transportation and power infrastructure, critical environmental assessments and First Nations agreements on resource revenue sharing and training is a massive undertaking.

In addition, environmentalists and NGOs are also having their say. Mining Watch issuing a news release warning about the dangers of some forms of chromite to both the environment and workers. Finland, which has one of the highest standards of living, environmental regulations and education in Europe, mines and processes chromite. Environmentally conscious Finnish miner, Outokumpu, operates a modern open-pit chromite mine at Kemi and a ferrochrome smelter in nearby Tornio, both located in the northern end of the Gulf of Bothnia, roughly 100 kilometres south of the Arctic Circle.

Canada and Ontario are globally recognized with some the best mining expertise and green regulations in the world and without a doubt an environmentally sustainable mine and refinery will be built. The environmental movement has been largely silent for most of this year. I suspect they are waiting for the right moment to make their move. I fear Hudak’s ill-timed comparison to the oil sands might be the spark that causes an escalation of anti-Ring of Fire activity.

The two Ring of Fire developments and required infrastructure are transformative, nation building projects that will fundamentally change the isolated Far North for the better.

It is this massive change that is causing enormous and legitimate fear and excitement in the surrounding First Nations communities. Make no mistake, Aboriginals in the Ring of Fire want this development as they see it as a chance to help alleviate their impoverish third-world living conditions.

But both Cliffs and the McGuinty government have done a shockingly bad job of meaningful consultations and most importantly listening to the profound concerns from the First Nations communities and leadership.

Recent actions from two important Aboriginal political organizations – Nishnawbe Aski Nation (NAN) and Matawa First Nations tribal council – indicate a very heated summer of confrontations in the Ring of Fire unless both Cliffs and the Ontario government start seriously engaging with First Nations in a much more meaningful manner.

In part two, I will discuss some possible solutions for the Ontario government/First Nations conflict as well as focus on Cliff’s unrealistic timelines and the road/railroad debate that has been largely ignored.

For Part 2 in a series on the Ring of Fire, please click here: http://republicofmining.com/2012/12/20/ring-of-fire-miles-to-go-before-we-dig-by-stan-sudol/

NAN Chiefs-in-Assembly support the position of Matawa First Nations Council (Netnewsledger.com – July 5, 2012)
The crash, the trapper and a plane load of missing gold – by Josh Wingrove (Globe and Mail – July 6, 2012)