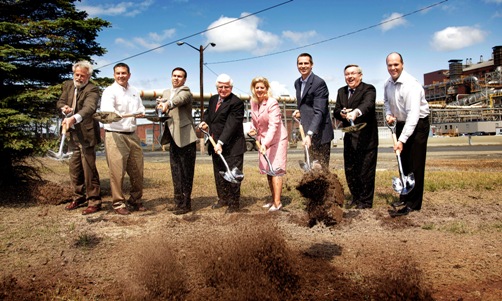 The Clean AER Project, where AER stands for ‘Atmospheric Emissions Reduction’, will see sulphur dioxide emissions at Vale’s smelter in Sudbury reduced by 70% from current levels, as well as dust and metals emissions reduced a further 35 to 40%. The project is scheduled to be completed by the end of 2015.

“This is an historic day for Vale and demonstrates the importance that Greater Sudbury plays in our global operations,” said John Pollesel, Chief Operating Officer of Vale Canada Limited and Director of Vale’s North Atlantic Base Metals operations. “Starting today, we are building a lasting legacy for our employees, the community and future generations who will live and work in Greater Sudbury, and that is truly a reason to celebrate.”

In addition to the environmental benefits, the Clean AER Project will result in significant economic benefits to the community. Vale estimates the project will require about 8-million person-hours of additional labour, with 1,300 additional workers needed on-site during the peak construction period.

“Vale’s Clean AER groundbreaking represents yet another chapter in the success story that is the re-greening of Sudbury, and speaks to the company’s commitment to the environment,” said Ontario Northern Development and Mines Minister Rick Bartolucci. 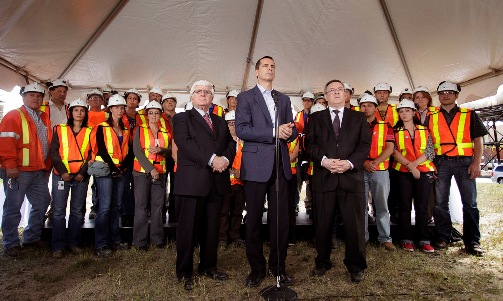 “Just as our government has moved the yardsticks toward more sustainable mining practices, it is heartening to see Vale is proactively working to improve its own practices.” Construction on the project will involve a complete retrofit of Vale’s smelter converter aisle, the construction of a new secondary baghouse and wet gas cleaning plant, a second Acid Plant, and new material handling facilities to better prevent dust from entering the community, all while the smelter will continue to operate.

The reduction in sulphur dioxide emissions will put Vale well below government regulated emission limits by 2015, to 45 kilotonnes versus the regulatory limit of 66 kilotonnes per year. This reduction is in addition to the 90% reduction in sulphur dioxide emissions Vale has incorporated since 1970 and will serve to complement the ongoing success story that is the re-greening of the Sudbury region.

Environment Minister Jim Bradley, who also served as Minister of the Environment in the 1980s, was on hand for the festivities.

“It is good to see Vale is living up to its environmental responsibilities, and is taking action to clean up the air in Sudbury,” said Minister Bradley. 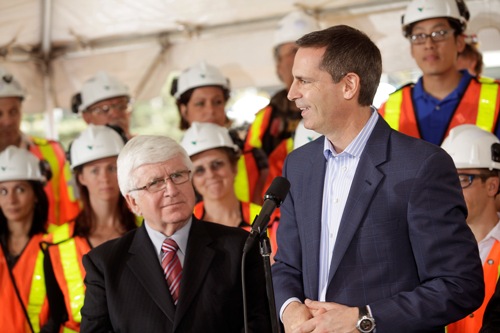 “For more than 100 years, Vale and its predecessors have played a leadership role in our community and in global mining,” said Greater Sudbury Mayor Marianne Matichuk, who also participated in the event. “It’s reassuring to see the company continuing this hardwork. This project will further cement Greater Sudbury’s position as a leader in environmental rehabilitation and green technology.”

For Project Director Dave Stefanuto, this groundbreaking represents the beginning of an exciting but very demanding period for Vale and the Clean AER Project team.

“This project is massive and will utilize the latest technological innovations available to us to retrofit our smelter complex,” said Stefanuto. “Due to the complexities involved, we have put a lot of time, energy, and resources into ensuring the project is executed efficiently and safely, and I’m very pleased that we’re now at a point where construction can begin.”

An assessment of Economic and Community Benefits for the project is currently being commissioned through KPMG in Sudbury, to better quantify what $2 billion in spending will mean to the community. This report is expected to be completed this fall.

In 2010, Vale announced a planned five-year investment program of $10 billion across Canada to enhance and expand its Canadian operations. Approximately $3.4 billion of this expenditure is being spent on modernizing Vale’s Sudbury Operations, including the Clean AER Project.

• The project will involve a complete retrofit of the converter aisle in Vale’s Copper Cliff smelter. Sulphur dioxide that currently goes up the super stack from the converters will be captured in a brand new wet gas cleaning plant and acid plant, converted to sulphuric acid and sold.

• The project will also involve construction of a new secondary baghouse, and new material handling facilities to better prevent dust from entering the community. The smelter will continue to operate through the construction period.

• The project will see sulphur dioxide (SO2) at Vale’s smelter in Sudbury reduced by 70% from current levels, as well dust and metals emissions a further 35 to 40%.

• Capturing the sulphur dioxide in the new acid plant will mean a reduction of about 100,000 metric tonnes per year no longer going into atmosphere. Acid production will increase from 810,000 tonnes to almost 1,000,000 tonnes to be sold and used by other industries

• Vale’s direct greenhouse gas emissions will decrease as our natural gas usage will decline by some 3.5-million cubic meters per year.

• The reduction in sulphur dioxide emissions will put Vale below government regulated emissions limits by 2015, to 45 kilotonnes versus the regulatory limit of 66 kilotonnes per year.

• This reduction is in addition to the 90% reduction in sulphur dioxide emissions Vale has incorporated since 1970 and will serve to compliment the ongoing success story that is the re-greening of the Sudbury region.

• At a cost of $2 billion, the Clean AER project is currently the largest single planned mining investment in Greater Sudbury.

• The Clean AER project will require about 8-million person-hours of additional labour, with 1,300 workers needed on-site during the peak construction period in 2013. This does not include off-site additional employment created with service providers

• The Clean AER project is purely an environmental project. In fact, the newlyrenovated smelter will cost approximately $11 million more a year to operate, with much of that revenue going to local suppliers.

• The Clean AER project is expected to result in significant benefit to local suppliers. Approximately 10% of the total contracts for the project have been issued to date, with more than half of the contracts issued to local service and supply providers.

• On average, over the life of the project, Clean AER equates to almost $400 million a year of construction value. In comparison, the total value of building permit construction in Greater Sudbury in 2011 amounted to $285 million.

• An assessment of Economic and Community Benefits for the project is currently being commissioned through KPMG in Sudbury, to better quantify what $2 billion in spending will mean to the community. While the final report is expected to be released this fall, preliminary numbers indicate:

o From 2011 to 2015, it is estimated that personnel related to the project will spend as much as $10 million on rental units in Greater Sudbury.

o Over the term of the Clean AER project, incremental hotel and motel revenues arising from the project could be in the order of $8 million.

The Clean AER project will involve:

• 15,500 metric tonnes of steel and ducting (about ¼ of the amount of steel in the Empire State Building)