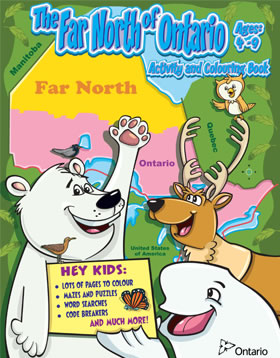 The Far North of Ontario and in particular, the Far North Act, has generated a contentious set of policy issues for Ontario’s government.  For the uninformed, the Far North Act is a process for community-based land use planning and development, that is also setting aside from development an interconnected area of conservation lands of at least 225,000 square kilometres — an area that is about 20 per cent of the landmass of Ontario.

To put it into context, it is an area about twice the size of southern Ontario — which represents only about 10 per cent of Ontario’s land mass.  There is concern about its impact on the long-term development prospects of Northern Ontario and the First Nations in the Region.  A response of the provincial government is that the Act has been misunderstood and needs to be better explained.

Well, as part of its special initiatives section, the Ontario Ministry of Natural Resources has a section on Ontario’s Far North that includes a 14 page downloadable colouring book titled “The Far North of Ontario Activity Colouring Book” targeted at ages 4-9.  My assumption is that as part of its approach at better explaining the Far North Act, the government is targeting young children in an educational initiative rather than its perception of the average intellectual level of Northern Ontario residents.

There are code breaker puzzles with messages like “The Far North is important in the fight against global ….? “, a spot the difference puzzle,  word scrambles, mazes, and of course some pages for colouring.  I suppose rather than the Eco-Regions Maze which allows you to find your way through four eco-regions, I would have preferred a Northern Development Planning Maze which navigates you through a decades long succession of northern development planning initiatives but in a circular pattern that returns you to where you started.

However, this colouring book is imaginative and no doubt a pilot project for the next special initiative – the Ontario Deficit Fighting Colouring and Activity Book – Suitable for All Ages.  On the red and black cover, a cheerful smiling drawing of austerity czar  and fitness buff (see Linda Diebel’s story in the Toronto Star article) Don Drummond with barber shears in one hand and an axe in the other.  On the inside, an encrypted code-breaker puzzle which when solved will provide you with a list of which government ministries get a 30 percent cut, which get a 20 percent and which ministries get a share of the budget savings to augment their priority spending agendas.  How about a fiscal projection number search where you try and find estimates of GDP, tax revenue and expenditures for the next decade?  Perhaps a spot the difference picture of the three Ontario political party leaders alongside their projected plans for deficit reduction just prior to the last election?  Make as many words as you can out of the letters in the phrase “Fiscal Austerity”?  How about the “Health Care Maze” where you help take your aging parents through various levels of health care using an imaginary crayon.

What more can I say? Ontario, Yours to Discover!