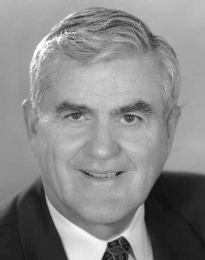 John Hansuld served Canada’s mining and minerals sector with distinction as a pioneering geochemist, entrepreneurial company-builder and dedicated industry advocate. As a scientist, he advanced the application of geochemical techniques to mineral exploration and enhanced the profile and prestige of its practitioners.

As a corporate leader, he built Amax Exploration (Canada) into a premier exploration and mine development group later taken public as Canamax Resources Inc. He was also instrumental in transforming the Prospectors and Developers Association of Canada (PDAC) from a largely Canadian organization to one of global influence.

Hansuld is perhaps best remembered for his leadership role in using the “flow-through share” tax-incentive program to fund Canadian mineral exploration at a time when many juniors were finding it difficult to access traditional capital markets. Flowthrough shares became a popular financing option, envied worldwide and used with great success to discover and develop mineral deposits in Canada.

Born and raised in Ontario, Hansuld earned his B.Sc. degree (Honours Geology) at McMaster University in 1954 before heading west to obtain his M.Sc. degree from the University of British Columbia. This was followed by a Ph.D. in geological sciences from McGill University (1961) and a P.M.D. from Harvard Business School (1968).

Hansuld began his association with AMAX as a company geochemist in 1961, and moved to Denver a year later as chief geochemist and manager of exploration research. In this role, he became a pioneer in the application of geochemical techniques to mineral exploration, notably by introducing the concept of Eh-pH phase equilibria diagrams to aid in the industry’s understanding of the relative mobility of common metals in the secondary dispersion media. He spearheaded the organization of the first International Geochemical Symposium in Denver, and the launching and early success of the Association of Exploration Geochemists.

In the late 1970s, Hansuld built Amax Exploration (Canada) into one of the largest exploration groups in Canada with 91 projects across the nation. In 1982, he convinced Amax to spin-out the Canadian projects into a new public entity that later developed the Bell Creek and Kremzar (Ontario) and Ketza River (Yukon) gold mines. The initial public offering for Canamax Resources sold out at just under $30 million in the spring of 1983, largely based on flow-through shares.

As PDAC president from 1993 to 1996, Hansuld helped revitalize the association by adopting a new logo, establishing a strategic plan and expanding the international focus of its annual convention. He was given PDAC’s Developer of the Year Award in 1988, in addition to other awards and honors bestowed over the years.