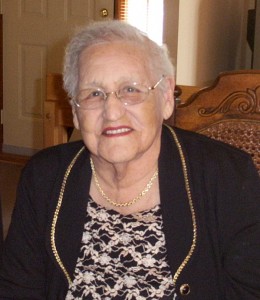 “This is a story built upon happy memories, a story of hardship and struggle. It is a true account of a Metis woman’s life. The material for this article was collected through my many years of knowing her and listening to her wisdom. This is the story of my grandmother Josephine Cone.” (Joanne Wetalainen)

Mail-order ballet lessons, travelling the Northwestern Ontario waters by right with two young children and guiding groups of prospectors through the wilderness in sub-zero temperatures are all treasured memories of seventy-year old Josephine Cone.

Born in May 1913 in Dinorwic, Ontario, to an Italian father and an Objiway mother, Josephine has a wealth of life’s experience to share with those willing to listen. She doesn’t call herself an “Ojibway” nor does she call herself a “Metis” but readily admits it was her mother who was the driving force in her upbringing.

After only a few years of marriage, her father became tri-lingual; speaking not only native Italian and English but learning to speak fluently in Objiway. “He could speak better Indian than some of the Indians in Dinorwic could,” Josephine recalls affectionately. Out of the five children born to her parents, Josephine was the only one who learned to speak her mother’s language.

At the age of thirteen, she got a part-time job at the provincial court room in Dryden. Whenever a case would come to provincial court involving native people, Josephine would be picked up  the police and taken to court to interpret for them. At sixteen she was offered a full-time job as court interpreter in Kenora. “But my father wouldn’t consider it” she says, “He didn’t think it proper for a young girl to live that way … you know … alone.” So that year, with her father’s adamant refusal, Josephine’s years as court interpreter drew to a close, but another sector of her life was about to begin.

Finding comfort in two diverging cultures was not the difficult task some may believe it to be and for Josephine, that comfort was established early in life. From a very early age, she learned the ancient dances of the Ojibway; attending all traditional ceremonies while at the same time taking ballet lessons by mail. “I would scrub floors for people so I could pay for my ballet lessons” says Josephine” but after three years I had to stop because I couldn’t afford them anymore.” After a moment of quiet reflection, she ads “Besides … what would a ballerina do in a small town like Dinorwic?”

“We never had much but we were happy.”

The summer of 1929 brought in an influx of miners and prospectors to the Dinorwic and Wabigoon area. It was that year she met Fred Cone, a miner from Kirkland Lake who was spending the summer prospecting in the area. Their meeting was brief – for only a few hours one day. But after Fred left Dinorwic and returned to his job in Kirkland Lake, he kept in touch by writing Josephine and like her ballet lessons, her first romance also – was by mail. They wrote each other for three years until finally one day she received a marriage proposal – also by mail.

August of 1931 found Josephine on a train bound for Kirkland Lake and a new life with a man she had only come to know through letters.

Josephine describes her marriage as the happiest days of her life. “We never had much but still, we were happy” she says with a trace of youthful vitality shining in her face.

During the winter months, Fred worked in various mines throughout Northwestern Ontario, while spring always marked the beginning of a new adventure. When the last trace of ice disappeared they got into their canoe and spend the entire summer prospecting on the lakes and rivers between Dinorwic and Fort Frances. “It wasn’t an easy life. We usual only managed to save enough money during the winter to pay for our summer supplies – and sometimes we didn’t even have enough to do that – but it didn’t matter – we always managed somehow and we were doing what we loved to do” she says.

Late autumn of 1932 witnessed the birth of their first child; a daughter who would soon become accustomed to her parent’s nomadic lifestyle. The following summer, not yet one year old, Edeline got her first taste of the prospecting life. Together the three boarded their 18 foot cedar strip canoe and began the 300 mile trip to Fort Frances. By this time Josephine was pregnant with her second child, but it didn’t stop her from carrying her fair share of the load over the 29 portages enroute. “We packed everything – canoe, a one and a half horsepower Johnson motor, all the supplies – not to mention Edeline …” she says. The trip usually took the family 3 weeks to complete, “but” Josephine says “that was going along at a leisurely pace.”

By the following summer Fred Jr. was three months old and a welcome companion for young Edeline on long voyages. Together they would sleep wrapped in the warmth of a Hudson Bay blanket under the bow of the canoe. “I remember traveling at night – sometimes even during thunderstorms” recalls Edeline, “but Mom and Dad would always say ‘Don’t worry – just go to sleep and we’ll get you home’. They always did.”

That same year, the family made another trip to Fort Frances, this time for the sole purpose of picking up a dog for the children. Only three weeks after they set out from the Dinorwic landing, they were on their way back home with “Balto” a black German shepherd. “We did some pretty foolish things in those days – who these days, would think of traveling 600 miles by canoe to pick up a dog,” asks Josephine.

With growing financial responsibilities, and the birth of their third child, the canoe trips along with the Turtle River system ended. That winter in 1937, “Roddy” was born.

Roddy’s first home was a 12 x 16 tent-top cabin at the Gold Rock mine. “It didn’t matter where we lived, Mom always made it a home to us” says Edeline, “She put Kraft paper from the Dryden mill on the walls of our cabin and decorated it with green polka dots … to try and make it cozy.”

With little education, no money & four young children, “I knew I had to something” …

Working in the Gold Rock Mine with its high concentration of silica dust, Fred was required to have regular medical check-ups to ensure his health was not endangered. But after three consecutive years of feeling ill, and the company doctors assuring him nothing was wrong with his health, Fred decided to see a doctor in Dryden.

Dr. Robinson’s diagnosis was “Silicosis of the lungs” and ordered Fred to stop working immediately. At that time there was no cure for Fred’s condition and although the disease had spread to such an extent that saving him was, unlikely, the doctor thought there was a chance. But four months later, at the age of 37, Fred died, leaving behind Josephine, and four young children – the youngest being only three months old.

This marked the beginning of a woman’s determined struggle. With little education and no money, Josephine sought help from the Compensation Board. In desperation, she finally settled for $1,000 in back-pay covering the time Fred was first examined by Dr. Robinson to one month after his death. Afterwards she was to receive $48 a month for herself and $12 a month for each child. The total income of $98 a month was scarcely enough to provide a young growing family.

“We just couldn’t survive on the money compensation gave us – I knew I had to do something else” says Josephine. So within a few months after her husband’s death, she was back in the prospecting business. Summers would find her acting as lead guide to mining parties, geologists and doctors. She would teach them maps that had to be submitted to the Mining Recorder in Kenora. Winters would find her on snowshoes, trudging through the wilderness in forty below zero weather.

“I would finish the days work, cook meals for the men on the campfire – then when everything was done, I would usually go off somewhere by myself – or go to my tent and read by candlelight” she says. It wasn’t an easy life for woman who had not yet reached her 25th birthday, but for Josephine the rewards were in carrying on the legacy of her late husband and knowing that her children were being provided for. In those days, she made a tremendous amount of money for her work, on occasion, as much as $500 for three or four days a week.

Eight years later, all but the youngest son had grown up and left home, Edeline married and the two boys Fred Jr. and Roddy went to work on a ranch in Lethbridge, Alberta. Josephine continued to work while the boys would send money home to help the family. “No matter how small their paycheques were, they would always send half of it home” says Josephine “even if they only made twenty dollars a paycheque – they would send ten of it home for us”

While at home one day between prospecting trips, Josephine got a call from Alberta, it was an urgent message from the Lethbridge General Hospital, asking Josephine to come quickly. Fred Jr. was in critical condition with a brain tumour. Josephine arrived in Lethbridge to find her seventeen year old son had died before she could reach him. At a time, where most would have given up, Josephine knew that her youngest son still needed to be cared for and within weeks of her son’s death, her work with mining parties continued until she herself fell victim to a back injury.

“I was guiding a group of prospectors and carrying an 18 foot cedar strip canoe across a portage. While trying to get up a steep rock cliff, I slipped and fell down.” She spent two and a half months recovering from the fall, then went back to work. But arthritis and sciatica finally set in the injury and left her unable to continue her work.

Her pilgrimages are of a different sort now. No longer travelling the Northwestern Ontario waterways, her summers are spent in a small cabin provided by her daughter and her husband. Her winters are spent alternating between the homes of her other children. She recalls her life with a smile, “It was a good life. We never had anything – we were poor, but we were happy.”

“Josephine remains happy to this day. Throughout the 1980’s she continued to spend time with family. She welcomed in many grandchildren and great grandchildren, told them stories of long ago and taught a work ethic that sustains us through the tough times.

At 90 she reinvested in the Bending Lake iron ore project and cheers on her grandson, Henry Wetelainen Jr in hopes that he can bring the age-old mine into production as she and Fred had hoped. Today at 97 she is still a pistol. She can recall the days of running mining camps when they’d prospected all day, set up camp at night and keep the fires going so they’d have baked beans and bannock for breakfast.

She eagerly watched the recent video feed of the guys moving the bulk sample and other mining activity out on the land. The BL website updates, emails and phone calls keep her abreast of our mining milestones and the realization of her dreams to mine the iron ore motherlode at Bending Lake.”

[Asbestos] The Story of a Dead Sailor, His Widow and a Bunch of Boneheaded Politicians – by Serge Schmemann (New York Times Editorial Observer – September 3, 2011)
Rich in Land, [Australian] Aborigines Split on How to Use It – by Norimitsu Onishi (New York Times – February 12, 2011)