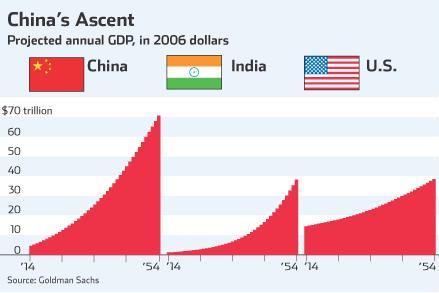 ResourceInvestor.com is a free service for the global community of individual and institutional investors, financial and mining professionals, and other stakeholders who can use the website for important research on natural resources investment strategy.

Jack Lifton is a leading authority on the sourcing and end use trends of rare and strategic metals. He is a founding principal of Technology Metals Research LLC and president of Jack Lifton LLC, consulting for institutional investors doing due diligence on metal-related opportunities.

The absolute importance of access to natural resources for a country’s future, can be well-illustrated by speculating on what could happen to China’s seemingly unstoppable growth, if the production rate of all metals does not grow in parallel to the world economy.

Figure 1 below, appeared last month in the Wall Street Journal, in an article by the distinguished British historian Niall Ferguson, titled “In China’s Orbit”. It projects GDP growth over the next 40 years for the world’s currently wealthiest (the USA) and the world’s two most populous nations (China and India). In his article, Professor Ferguson touches upon the extraordinary growth in China’s demand for metals over the last generation, but he doesn’t either examine the situation in depth nor draw any conclusions about this rate of growth as a limiting factor on the possibility of further such growth. Look at the chart, and I will then make a few remarks.

The source of the above chart is Goldman-Sachs, surely one of America’s most astute financial operators, and, one would also think, conservative prognosticators. I am therefore surprised at these projections being so optimistic for China and India. That said, keeping in mind that there are lots of projections out there of even more optimistic (very high) growth, it’s important to understand that the above figures are indeed actually conservative.

I have written extensively over the last two years about the global production of all metals and about China’s arrival in 2009-10 at the position of being the largest producer (supplier) as well as the largest end-user (demand) of metals in the world.

The $70 trillion GDP figure for the 2009 world economy included the production and consumption of 1.2 billion tons of all metals. According to the Goldman-Sachs analysis quoted by Professor Ferguson, China alone will produce the GDP of the entire world of 2009 by 2054 – that is to say, within 45 years. Yet, even if China achieved this phenomenal growth, it would still have a lower GDP/citizen than the USA in 2054, if the US population keeps the same ratio to Chinese population that it has today, which is 1:4. China’s 2054 GDP would only be twice that of the USA’s in 2054 if its population is still four times that of the USA.

Assuming that China’s GDP in 2054 will be twice that of either the USA or of India, China’s economy will be less than half of the world’s total GDP since there will be many nations in addition to the USA and India with substantial GDPs. We can therefore easily and conservatively estimate a global GDP for 2054 of $200 trillion US (2010) dollars. This is three times the global GDP of 2009.

For the sake of argument, let’s assume that this rate of growth for the Chinese economy is do-able. This would mean that in just under 12 years, by 2022, China’s economy would double, albeit to only $10 trillion. Note that if China’s growth rate, on the other hand, continues at a rate the same as it has had in 2010 (>10%) then the Chinese GDP will double in just 7.25 years.

The question I want to ask is this: can the global production of all metals grow at the same rate as the Chinese economy, and if so, would such a growth rate be enough to allow the next powerhouse(s) such as India or Brazil to begin growing at a similar rate or even more ominously to begin growing at all?

The rate of growth of all metals, which I define as GMP(1), the annual total Global Metal Production for all of the metals produced in the world, is dominated by iron, in the form of crude steel, which has consistently been 90% or more of global metals production in total.

The increases in the general total of the production of all metals other than iron, have been mistakenly seen as an independent phenomenon for each of the non-ferrous metals. This means that GMP(2), as linked to GMP(1), has not been reported or studied, and perhaps even has been missed by financial observers, due to the disinterest of the mainstream media in any detailed analysis of the global production of all metals.

In the last 10 years, the first 10 years of the 21st century, crude steel production has increased steadily except for the period during the 2007-2009 world economic recession, and even this halt to growth was actually a geographic anomaly. China’s torrid growth in the output of crude steel has not had a stable or negative growth year in the 21st century. During that period Chinese crude steel production first surpassed that of the USA, then Europe and Japan in successive years prior to 2005.

To defray one immediate criticism, let me say that I understand that economists hold that the rate of consumption of metals by national economies tends to stabilize as the particular nation’s economy matures. However, I believe that such stabilization, if it occurs, does not occur until the nation reaches a goal, which in the case of the present world, is to match the 2010 GDP of the USA and then to match it on a per capita level. Goldman-Sachs predicts that China’s GDP will reach the first gross match of that of the USA, in 2027. Even if growth were to then cease in China, it would require a tripling of Chinese consumption of all metals by 2027 to meet even the goal of matching the US’s then projected GDP.

The key problem for the maintenance of global GDP growth, even at the conservative Goldman-Sachs rates, is whether or not GMP(2) can maintain its growth rate so as to continue to be 10% of GMP(1).

Let me state at this point, that the issue is the continuation in the rate of growth of the production of the metals constituting GMP(2), in the ratios in which they are produced today, because those ratios represent the uses that our technological civilization requires. If the production rates and relative proportions shown in Figure 3 are not maintained, then China’s growth must slow. If there is no major increase in GMP(1) with the concomitant increase in GMP(2), then neither India nor any other large nation will be able to grow its GDP as China has done.

It is thus critical to the world’s growth, and I think stability, that the question of whether or not non-ferrous metal production rates can keep up with projected demand due to the growth of first the Chinese and then the Indian economies, must now be addressed by the global financial and political communities.

Geological and mineral processing experts will tell us if there are enough ores of sufficient grades in actuality and in theory for global growth to be maintained as projected. But there is not today a sufficient store of reliable transparent data to make such a determination.

For the rest of this column, please go to the Resource Investor website: http://www.resourceinvestor.com/News/2010/12/Pages/How-will-Resources-Constrain-Asian-Growth.aspx?k=%22jack+lifton%22