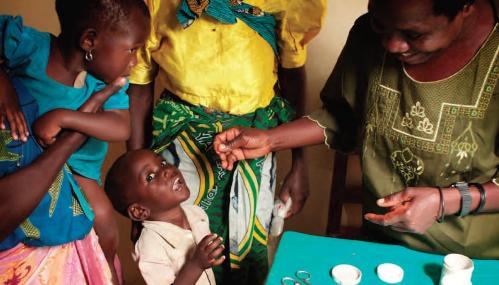 This article is from the April 2010 issue of Beyond Borders: A Barrick Gold Report on Responsible Mining. The Lake Zone Health Initiative was established by Barrick to help combat HIV/AIDS, malaria and tuberculosis and improve access to health services for underserved populations. This collaborative effort involves the Tanzanian government, aid agencies and other partners.

They are called the Big Three. They are HIV/AIDS, malaria and tuberculosis. Together, they kill thousands of people each year in Tanzania.

These life-threatening diseases pose a serious risk to employees in the mining sector and communities near mining operations, resulting in soaring health care costs and a high rate of employee absenteeism.

Building on a long history of providing successful disease prevention programs in Tanzania, in 2008 Barrick launched the Lake Zone Health Initiative in an effort to improve health services to underserved populations in the Lake Zone region. Home to nine million residents, Tanzania’s Lake Zone wraps around Lake Victoria and spans seven regions, including the Mara and Kahama districts where the Bulyanhulu, Buzwagi and North Mara mines are located. While these mines are now operated by African Barrick Gold, the new public company created by Barrick earlier this year, the commitment to continue this flagship community health program remains as strong as ever.

The public-private sector health initiative is making it possible for companies, the government, health NGOs and donors like USAID to work collaboratively together to combat HIV, malaria and TB. “Our hope is that all future health programs in this area will be filtered through the Lake Zone Health Initiative so that no program is overlapping or duplicating another,” says Dr. Rob Barbour, Barrick’s Chief Medical Officer. “We support existing government efforts to enhance health services and enable all stakeholders to contribute to common health care goals in a cohesive way.”

Dr. Barbour is leading the effort and Stephen Kisakye, the company’s community health coordinator in Tanzania, is making it happen on the ground. The initiative already has a number of prominent partners, including the Touch Foundation, Populations Services International, and EngenderHealth among others.

“We know that HIV poses a serious threat not only to our workforce but to the community at large,” Dr. Barbour said. To counter this threat, the company has an extensive HIV/AIDS education and treatment program at all of its Tanzanian operations. The program promotes voluntary testing and involves teams of peer health educators who engage with employees and the wider community, raising awareness about HIV transmission and prevention.

A 2006 study conducted by the African Medical & Research Foundation (AMREF) at the company’s North Mara mine in 2006 found that the prevalence of HIV among mine workers was 10 per cent. In contrast, in the communities surrounding the mine, the rate for men was reported at 2.6 per cent. For women, however, it was almost three times higher at seven per cent.

“Mining is a sector that traditionally attracts and employs large numbers of men,” explains Kisakye. “Women are also drawn to these primarily male clustered populations in search of employment and economic opportunities. In some cases, we have seen a rise in commercial sex work associated with the economic opportunities that mining creates.”

Kisakye acknowledges that it has been challenging to change the perception that there is a low risk associated with these sexual behaviors, noting that negative attitudes among men toward condom use are a persistent problem in many areas of the country. A 2007/2008 Tanzanian HIV/AIDS and Malaria Indicator survey found that eight per cent of men aged 15 to 49 paid for sex in the previous 12 months and 60 per cent of these men reported that they used a condom. Among youth aged 20 to 24, the percentage of men who paid for sex increased to 13 per cent, while condom use was slightly lower at 58 per cent. So while more young men may be paying for sex, the message about condom use has not been gaining traction with this segment of the population.

To address underlying gender issues that drive HIV/AIDS transmission, the Bulyanhulu mine has partnered with EngenderHealth, a leading international health organization that specializes in reproductive health and gender equality. The five-year pilot program is confronting the vulnerabilities of women by making men a big part of the solution. Barrick and USAID (through EngenderHealth) jointly provide funding for the $700,000 program, which is being implemented in collaboration with local health practitioners and the district government.

The Bulyanhulu mine is located in the Kahama district, Shinyanga region, where the overall HIV prevalence rate is a statistically-high 7.6 per cent. Armed with health campaign materials, a team of 60 newly trained peer health educators have been spreading the message in the workplace and to the community’s 50,000-member population, helping to break down cultural taboos and discuss the importance of safe sex.

EngenderHealth created the CHAMPION program, which stands for “channeling men’s positive involvement in the national HIV/AIDS response”. This national program engages Tanzanian men as health “champions” in preventing and reducing HIV/AIDS and encourages the use of condoms. This pioneering program is contributing to a national dialogue about health, gender roles and equality for women within the country.

As part of the EngenderHealth partnership, the Bulyanhulu mine is also revamping its condom distribution program to reach even more people in the community. Given the recent success at this operation, scale-up efforts are now underway to expand the program to include the North Mara mine in the near future.

Tuberculosis is also gaining ground as a killer in sub-Saharan Africa. Recent studies show a resurgence in the prevalence of the disease and the emergence of multi-drug resistant strains.

At the Bulyanhulu mine, each employee is screened for TB through sputum smears and chest X-rays. To help employees recognize the signs of TB, the company has an extensive education and awareness program inside the mine and in the community.

Recognizing that the combination of HIV and TB can be deadly, employees who are HIV-positive are provided with isoniazid preventative therapy, which reduces the risk of TB in patients with HIV/AIDS. Barrick also partners with medical students from the Tanzania Medical Students Association to reach out to the underserved and isolated communities that surround the mine.

To be most effective, company programs are conducted in collaboration with the Ministry of Health, and its existing medical program. While the company funds the awareness and education campaign, TB medications are distributed through the district health facilities, thus efforts complement rather than duplicate each other.

Stopping the spread of malaria

The final of the big three diseases, malaria, has always been a priority for Barrick in Tanzania. The company has conducted a variety of education, testing and spraying programs.

Currently, an indoor residual spraying (IRS) program is underway that uses chemicals to kill mosquitos inside homes and buildings. The pilot process is allowing Dr. Barbour and his team to observe where and when the insects show up and which chemicals are most effective in killing them. “First we will see what works the best and then we will roll the best program out to the greater population,” Dr. Barbour says.

Dr. Barbour admits that the high rates of HIV/AIDS, malaria and TB in communities surrounding the company’s mines make dealing with these diseases extremely challenging. Compounding the problem is a lack of basic primary health care at medical clinics and limited home-based care services for patients after they leave the clinics.

“The Lake Zone Health Initiative is huge for us and for the development of this region,” said Dr. Barbour. “To be successful in addressing these issues, we have to work together with many partners but with one strategic plan in mind.”

In the months ahead, Dr. Barbour and Kisakye will be conducting health impact assessments of the communities surrounding the company’s mines in Tanzania, starting with the newest operation, Buzwagi. This vital information is expected to take the company’s health programs to the next level. These assessments will allow the company’s health experts to develop a baseline of the existing health status of local populations and accurately measure the impact of health programs over the life of its mining operations.

For new, large-scale operations, that can sometimes mean 20 years or more.

While Dr. Barbour recognizes the enormity of the challenges ahead, he doesn’t believe in rushing things to create artificial results. “We are proceeding at a slow, steady pace, improving and adapting where needed. That’s the way to get it right and have a lasting, widespread impact on these communities, well into the future.”