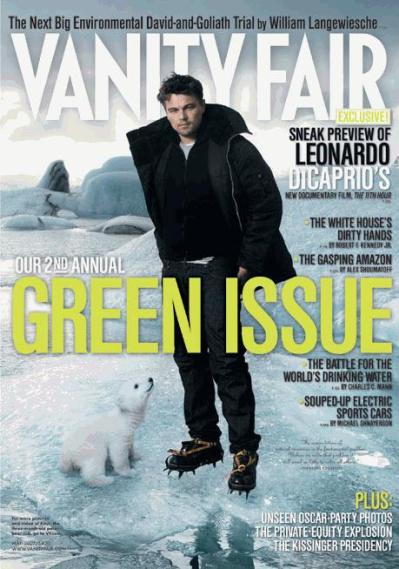 A version of this column was originally published in the June 2007 edition of Northern Ontario Business .

The mining sector is ignoring the green light at the end of the tunnel that is attached to a 100-tonne locomotive driven by the environmental movement.

The collision is going to be messy! It will impact the industry at a time when the voracious metal demands of China and India could bring enormous prosperity to isolated Aboriginal communities throughout northern Ontario.

This constant demonization of the mining sector by media-savvy NGOs is also affecting the recruitment of the next generation of workers the industry so desperately needs.

From the Academy award-winning documentary An Inconvenient Truth that stars Al Gore to Hollywood actor Leonardo DiCaprio posing on the cover of Vanity Fair – photographed in the Arctic with a cute polar bear cub to highlight global warming – there is no doubt that environmental issues dominate society’s cultural and political agendas.

Unfortunately, the mining sins of the father are certainly coming back to haunt the sons!

Past industry practices that were detrimental to the environment are still highlighted by the anti-mining crowd today.

Yet, the reality of mining in the 21st century is quite the opposite. Strict environmental regulations are enforced on all new projects. Mining companies must develop closure or decommissioning plans that require the restoration of all lands to their natural state when the operations are finished.

Over the past 20 years, the industry has made tremendous strides at reducing the environmental footprint of their operations.

In the Sudbury Basin, CVRD Inco has spent close to $1 billion over the past 30 years to reduce the amount of sulphur pollution by 90% from their local smelter complex – one of the largest in the world.

However, calls to freeze resource development in Ontario’s vast mineral-rich, boreal region are being met with favourable reactions in southern, vote-rich urban ridings where most people have very little understanding of the mining sector.

Some geographical perspective might be helpful in the debate about how much land should be off limits to resource development. Northern Ontario is vast, encompassing roughly 90 per cent of the area north of the French and Mattawa Rivers.  Ontario’s north is larger in area than every other province in Canada except for Quebec and British Columbia. Northwestern Ontario alone is approximately the same size as Italy while the Northeast is about the size of France.

How many more trillion-dollar Sudbury Basins are waiting to be discovered? The Basin is the richest mining district in North America and among the top ten most significant globally.

To northerners, the constant rhetoric about mine development and ensuing loss of wilderness would be akin to protesting the building of southern auto factories and the disappearance of irreplaceable farmland through urban sprawl.

At Goldcorp’s Musselwhite gold mine, located 500 kilometres north of Thunder Bay, a precedent-setting agreement between the company and four surrounding First Nations communities ensures that qualified aboriginals are given priority in the hiring process. In addition, native businesses were encouraged to supply the mine site with services and First Nation employees were also provided with apprenticeship training programs in various trades.

De Beers Canada Inc. is currently building a $1 billion diamond mine near Attawapiskat on the James Bay Coast. The company is spending $135 million in Aboriginal joint venture businesses and $80 million on an electrical transmission and fibre optic lines for First Nation communities. In addition, De Beers has dedicated $1.2 million on literacy programs in the coastal settlements, has built an $850,000 training centre and will fund about $10 million on pre-employment training.

Notwithstanding all of De Beers’ worthwhile efforts the Ontario government stabbed the company in the back and arbitrarily imposed a new 13 per cent diamond royalty.

A growing the pool of work-ready and highly skilled aboriginal employees for the mining industry should be of significant importance to Ontario society.

The mining industry’s inability to effectively communicate these green and social initiatives to the important Toronto media and on the influential web not only impacts their reputation but more critically, impedes youth recruitment.

This “Google generation” has grown up with an unprecedented revolution in technology with the advent of cell phones, the internet, blogs, wikipedia and YouTube, just to mention a few.

Many studies have indicated that the prime source of information and news for this cohort is the internet. Environmental groups and NGOs seem to have full control of the web, dispensing their “green propaganda” to the detriment of the mining sector. What teenager would want to enter an industry with such an appalling image and reputation?

A 2005 study on employment in the Canadian mining sector by the Mining Industry Training and Adjustment Council found that the industry will need to hire up to 81,000 highly skilled new employees over the next decade.

Student enrollment in post-secondary mining-related programs is well below the predicted demand to replace existing workers.

The future looks grim and dim unless there is a significant change in society’s understanding and acceptance of sustainable green mining practices.

With the highest profits in decades, one has to ask why the industry is not spending more money on public relations initiatives, to get the true stories out, especially when their social license to operate is routinely being questioned and threatened.

If the mining sector wishes to thrive and prosper over the next few decades, they have to do a much, much better job of communicating with urbanized Canadians and the media. Their activities of the past few years are simply not good enough!