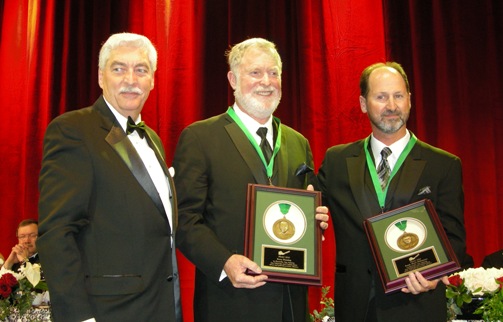 The PDAC Thayer Lindsley International Mineral Discoveries Award recognizes an individual or a team of explorationists credited with a recent significant mineral discovery anywhere in the world. It reflects the global nature of mining and the fact that Canadians are making enormous contribution to this sector. This award is in memory of Thayer Lindsley, one of the greatest mine finders in all time.

Perry Durning and Frank (Bud) Hillemeyer are recognized for their outstanding record of grassroots discoveries in Mexico, particularly the San Sebastian silver-gold mine, the San Agustin gold deposit, the Pitarrilla silver deposit, and the Camino Rojo gold discovery.

Durning and Hillemeyer formed La Cuesta International in 1993 after roughly a decade together at Fischer-Watt Gold, an Arizona and Nevada-based mineral exploration firm.

In 1994, Burning and Hillemeyer, working on behalf of Monarch Resources, began to explore an area known to host mercury deposits. Some major mining companies had previously sent geologists to investigate the district but they returned empty handed.

About half of the boulders collected in the initial sampling contained bonanza-grade ore assaying more than 10 grams gold and 500 grams silver per tonne. Mapping and sampling of the float boulders led to a small outcrop of high-grade epithermal gold-silver veins.

Idaho-based Hecla Mining Co. bought Monarch in 1999 and brought the San Sebastian gold-silver deposit into production. Over a mine life of four years, the mine produced 11.2 million ounces of silver and almost 156,000 ounces of byproduct gold.

The following year, Hillemeyer and Durning continued to work in Durango. The men determined that the intensity of alteration increased in altered intrusive rocks as they explored the fringes north and east of a small past-producing district. Mapping and the collection of rock and stream-sediment samples led to some strong gold, silver, lead and zinc anomalies. The anomalous mineralization at San Agustin occurs in a six-square-kilometre dacite dome complex.

Geological mapping combined with stream-sediment and rock-chip sampling allowed Durning and Hillemeyer to locate the productive parts of the complex.

This sort of sleuthing ultimately led to the discovery of the gold-silver-lead-zinc mineralized system at San Agustin.

Additional grassroots exploration for Monarch Resources in 1995 recognized the large mineral system at Pitarrilla. However, early drilling by Monarch yielded disappointing results and Pitarrilla was turned over to La Cuesta in 1998.

By the turn of the century, the mining industry was mired in a recession and La Cuesta was forced to abandon Pitarrilla.

But Durning and Hillemeyer received another chance to solve the deposit in May 2002 when Silver Standard funded the cost of a new concession and hired them to explore the large alteration zone in more detail.

Today, Pitarrilla hosts a measured and indicated resource of 726 million ounces of silver.

In 2007, Durning and Hillemeyer were conducting reconnaissance exploration on behalf of Canplats Resources near Zacatecas, Mexico, when they noticed that the aggregate for the gravel of the road on which they were traveling had changed from light tan to an earthy red.

They traced the source of the aggregate to a small quarry about 500 metres from the road. In the quarry, they immediately recognized that the locally intense hematitic alteration associated with moderate brecciation was similar to Goldcorp Inc.’s nearby Penasquito gold-silver deposit.

They collected a few samples and called Canplats Resources’ president Gordon Davis. Instructions were given to immediately stake the prospect now known as Camino Rojo.

The first samples from the quarry returned values of 0.2 gram to more than 2 grams gold and 5 to 30 grams silver per tonne.

These four major discoveries made by Durning and Hillemeyer over sixteen years stand as a testament to their solid achievements in grassroots mineral exploration.