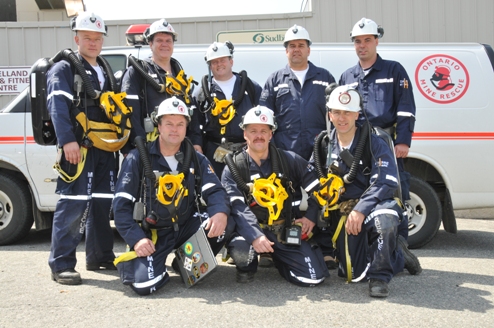 Xstrata Nickel´s Fraser/Thayer Lindsley mine rescue team captured the top prize in the 2008 competition, which was held in Sudbury. Let´s applaud all team members in earning the coveted gold helmets as overall competition winners. This team earned first place overall as well as in the team firefighting and team first aid categories. The competition was held in Onaping at the NORCAT Training Centre, which is the former Fecunis Mine.

“Congratulations to the members of the Fraser/Thayer Lindsley team. They were outstanding representatives of both Xstrata Nickel and the Sudbury District with their performance,” said Mike Romaniuk, Vice President of Sudbury Operations for Xstrata Nickel. “This is a clear demonstration of the quality of our mine rescue program and the commitment of all employees to ensuring the health and safety of our workers.”

Teams from six districts, which had previously won regional competitions, were involved in the provincial finals. Vale Inco´s East Mines gained second place in the overall team competition. In the special equipment category, Compass Minerals Sifto Salt Mine tied with Hemlo Mines for top honours. In the Technician Award competition, Norm Begin of Hemlo Mines was the winner for the third consecutive year. Also, in this category, Derrick Parsons, Vale Inco East Mines, was second and Richard Gilbert, FNX Mining, was third.

In the competition, eight-person teams simulate a response to a crisis situation, during which they are judged on their use of field testing gear, briefings delivered to team members and the rescue simulation. Mine rescue is a specialized and provincially regulated aspect of emergency response for mining operations.

This year marks the 79th anniversary of the mine rescue program in Ontario. The actual Ontario Mine Rescue competitions began in 1950 in the Porcupine area. Xstrata Nickel´s Fraser/Thayer Lindsley team has come out on top in the 58th mine rescue competition. The program continues as a way to ensure consistent training and use of equipment across the province, to share experiences and to improve emergency response in underground mines. The mine rescue program is administered in Ontario by the Mines and Aggregates Safety and Health Association (MASHA).