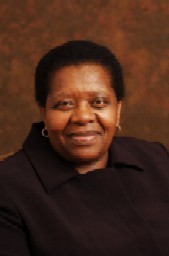 Buyelwa Patience Sonjica was appointed to the high-profile position of South Africa’s Minister of Minerals and Energy on May 22, 2006, after serving as Minister of Water Affairs and Forestry from April 2004 to May 2006. Before that post, she served as Deputy Minister of Arts, Culture, Science and Technology.

Ms. Sonjica’s interesting and extensive political career began in 1976 when, inspired by the Black Consciousness Movement, she became involved in student politics in the East London area of South Africa. She also joined the activities of the Mass Democratic Movement, including the United Democratic Front (UDF) and the National Education Union of South Africa (NEUSA). She then became an active member of the South African Democratic Teachers Union (SADTU) from its inception.

Between 1992 and 1994, Ms. Sonjica was elected to the Regional Executive Committee of the African National Congress (ANC), ANC Women’s League (ANCWL), and ANC Regional Working Committee. She headed the ANC’s Department of Arts in the old Eastern Cape region, involved in both the transformation of the arts and the development of the ANC policy under famed South African writer, poet and politician Wally Serote, then national co-ordinator.

In 1994, she was elected to Parliament serving on the first Parliamentary Portfolio Committee of Arts and Culture. She also served on the portfolio committees on finance, trade and industry, as well as water affairs and forestry. In 1995, she became Chairperson of the Select Committee on Child Care Facilities.  From 1994 till 1999, she was an ANC Whip.

Bio Supplied to Republic of Mining.com