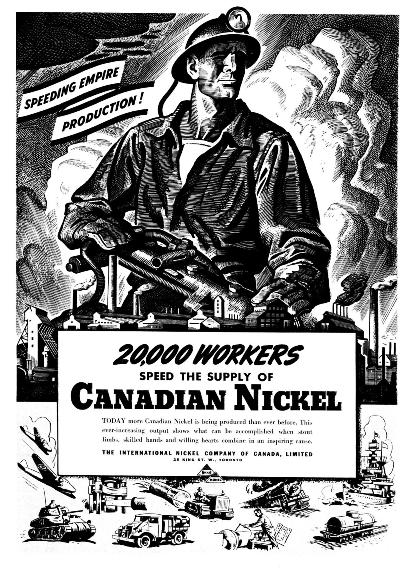 The city is Sudbury, the hustling, bustling hub of a rock-strewn territory which is not only the most richly mineralized area of Canada but of the entire western hemisphere. No spectre of ghostdom haunts blatantly prosperous Sudbury. It is here to stay, a permanent fixture on the map of Northern Ontario, 80 miles inland from Georgian Bay.

Sudbury is a lusty, chest-thumping, nonsleeping and rather wicked melting pot of both mankind and ore which has operated as a mining camp since 1883. Today it has become a peculiar mixture of frontier town, modern city and distributing centre. More than $2 billions worth of extremely diversified metals have been taken from the rock within a 15-mile radius of the city. Yet there is no sign of the fabulous deposits petering out; proven ore reserves and multi – million dollar developments now under way seem to indicate the area is just getting into stride.

Sudbury is here to stay because the bleak surrounding rocks have made it:

Moreover, Sudbury’s fabulous ore contains large quantities of iron. The International Nickel Company, chief developer of the area’s wealth, recently announced the discovery of a flash-smelting process which would open the door to complete fabrication of nickel steel on the spot.

If and when this happens, Sudbury, already a boom city, has an ear of prosperity ahead which is quite unpredictable in its proportions.

“We’re here to stay, all right,” says Mayor William S. Beaton, incumbent for the past decade and an extrovert who shines amid a city full of them. “There’s enough mineral wealth to keep the next five generations busy. Moreover, we’re situated as the chief distributing centre of Northern Ontario. We can’t go wrong, whatever come or goes.”

Three great plumes of smoke from the giant smelter of the International Nickel Company at Copper Cliff, four miles distant, drift in the upper air above Sudbury as it squats on the main trans-continental line of the Canadian Pacific Railway. The vast ore bodies were discovered when this railway was cut through the bush. The main line of the Canadian National passes only 27 miles to the north at Capreol.

On the west, Port Arthur is the next large community, 550 miles away across rich, undulating forest. Hence, Sudbury has become a supply point for a large portion of Northern Ontario’s lumber and pulpwood industry, the jumping-off place for a fine hunting and fishing area and the focal point of a flourishing agricultural industry which is gradually pushing back the forest line.

The city, a brew of 26 nationalities attracted by the record wages of the mining and smelting industry, sits in an oyster-shaped cup amid rocks of stark grandeur, or harsh ugliness, depending on how you care to regard them. Visitors have termed the approaches to the city “a hunk of Dante’s Inferno,” but a speaker at a women’s club recently described the scenery as beautiful, to the astonishment of listeners.

Lake Ramsey, blue and island-studded, flanks the southeast side of the city. The lake is Northern Ontario’s major bush-flying centre. Two air transport companies and the Ontario Department of Lands and Forests maintain bases. Numerous private citizens also own planes and sometimes as many as 30 aircraft can be counted on the lake.

There Are 42 Taxi Companies

A second CPR line swings westward 190 miles to Sault Ste. Marie. A third snakes southward through low chalky mountains to the North Channel, supplying the city with a lake port. Caravans of ore trains chuff across the immediate environs over a web of tracks, coming and going from the adjoining mining and smelting towns of Copper Cliff, Coniston, Creighton, Garson, Frood, Levack and Falconbridge.

The smoke from all these trains used to be so heavy that up to two years ago a Sudbury housewife took a big risk in hanging out her washing. Now locomotives in the CPR yards are Diesel powered and the smoke nuisance has abated.

The CPR mail line has been a cause of acute frustration to the city fire department, whose single hall is east of the tracks. About once a year firemen rush toward the west en tot find the line blocked at all three points where traffic can cross. This happened in early February when the Sudbury Granite Club was destroyed by fire in 20-below weather. Two fire trucks, the fire chief’s car and a police cruiser, all speeding to the fire, were forced to detour about three miles. A subway is now under construction to break this bottleneck.

Sudbury’s population has vaulted from 20,000 in 1930 to its present 47,000. there are another 11,000 persons in adjoining McKim Township, largely uninhabited 20 years ago. The Sudbury Chamber of Commerce claims the area is the most prosperous in Canada. Seventeen licensed real-estate dealers chase each other feverishly around the congested property market within the city.

The Chamber of Commerce also claims the city has the most new cars per capital in Canada. There are an even 40 service stations, and the amazing total of 42 taxi companies, all appearing to thrive.

Base wage rate above ground in the nickel industry is $1.23 ½  an hour and below ground it is $1.35. With shift bonuses and other gratuities, most workers average about $1.50. this stirring state of affairs is reflected in the payday crowds on Elm Street and Durham Street, the two main thoroughfares, where a football-field technique is required to get through the prosperous mobs.

Packsack-laden trappers, lumberjacks and prospectors jostle miners carrying lunch pails, hustling clerks and women sporting fine fur coats. Incidentally, it’s another local boast there are more fur coats per capita in Sudbury than anywhere else in the land.
The trappers may be bound for any of the city’s seven fur buyers, or for the head office of the Forestry Department on Cedar Street. The lumber-jacks may be on their way to the hiring offices of any half dozen lumber and pulp companies. Perhaps the prospectors are going to the assay office, to an office of one of the three diamond drilling companies, or to the mine recorder’s office to register claims. More than 60,000 claims have been registered there since the office opened in 1908.

On the other hand, all three may be on their way to get renovated at the pants-pressing shop of John Woytowych, a six-foot Ukrainian who announced a year ago he was the fastest pants-presser in the world. He was timed with a stop watch at 58 3-5 seconds for a pair of grey flannel trousers. Yet again, the three may be heading for the nearest of 18 hotels.

Drinking is one of the popular pastimes of Sudbury residents and with some, a seemingly full-time occupation. The surprising total of 1,598 persons were nabbed last year by city police under the Liquor Control Act. This, too, is claimed as some kind of a Canadian record per capita. Traveling salesmen do well in unloading big quantities of merchandise in Sudbury, but most large concerns don’t send representatives with a predilection for alcohol.

These somewhat raffish conditions are taken as a matter of course by city natives. They’re a tolerant lot and it’s a well-known local axiom that a man can sin in Sudbury and be forgiven. This tolerance comes from many nationalities living side by side, each adopting a broad viewpoint concerning the others’ customs, fetishes and idiosyncrasies. While travel may be broadening, there’s nothing like living in a melting pot to obliterate prejudices, Sudburians claim. Or, if one prefers to continue being prejudiced, opportunities for getting punched on the nose lie at every hand.

If a person stood long enough at the corner of Elm and Durham he would ultimately hear almost every language on earth from the lips of the passersby. The 1941 census fixed the racial origins of Sudbury’s people at 42% British, 33% French, 5% Ukrainian, 3% Italian, 3% Polish, with the rest including Germans, Finns and Chinese. Many believe the percentage of British born has shrunk in the 10 years since the census.

There’s an English radio station, CKSO, and an English daily, the Sudbury Daily Star; both were owned by the late remarkable W.E. Mason, an unreconstructed individualist with a strain of buccaneer. The French support a bilingual radio station, CHNO, and a weekly paper, L’Ami du Peuple. Two Finnish papers with a strong Communist slant are published.

The diversity of the population has created a unique system of remuneration in some of the garish-fronted stores in the downtown section, many proprietored by pursuers of the fast dollar who have come to Sudbury to get rich quick, and are doing it. If a man can speak five languages he gets paid more than one who can speak only three. One versatile high-salaried salesman in a gents furnishing store on Elm street can converse intelligibly in nine.

In the social pages of the Sudbury Star, names seven syllables long are coupled with those of British and French origin. Intermarriage is commonplace may, even the rule. A phenomenon at the public schools and the Sudbury Mining and Technical School is the manner in which students call each other “hunky,” “wop” and “bloke,” face to face and without bitterness.

Walk north, south, east or west in Sudbury and you will bump into a national hall of one description or another, generally with a group standing on the steps, conversing in its native tongue. You can even find the Sons of Scotland Hall.

The city is the North American stronghold of the International Union of Mine, Mill and Smelter Workers, which was expelled from the Canadian Congress of Labor two years ago because of Communist affiliations. Sudbury’s Local 598 claims a membership of 12,000 at International Nickel and Falconbridge Nickel Mines and collects $330,000 a year in a check-off. At present organizers of the United Steelworkers are in the city in an effort to smash Mine-Mill. One of the toughest battles in Canadian labor history seems scheduled for the next year or two.