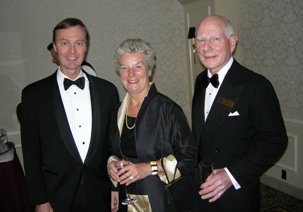 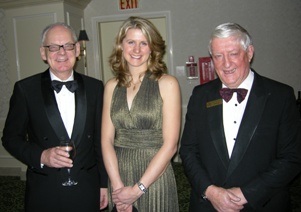 Tonight is the anniversary of the announcement made here last year by Teck Cominco, The Canadian Mining Hall of Fame and The Royal Ontario Museum of a vibrant new partnership at the corner of Bloor and Queen’s Park in Toronto – and beyond.

Jack McOuat was the matchmaker and midwife of this announcement, and I want to especially thank him again tonight for his leadership.

Millions of visitors from around the world will now be exposed to the beauties of the earth and story of Canadian mining heroes as a result of this project.

The Teck Cominco Suite of Earth Sciences Galleries opens next December, and will bring thousands of amazing mineral specimens to public view on open platforms and in brilliant glass walls running the length of a new gallery on the second floor. This is nature’s jewelry, and we want to show it off with panache.

The Gallery will also feature a new Gem and Gold room filled with cut stones and other star pieces – where in the past, smart young men often proposed to uncertain young women – and elicited yes for an answer.

There will also be an interactive map mode that refers to key mining locations across the country, and ties the biographies of the inductees to specific sites and projects.

All of this content will be updated each year with the announcement of new members to the Canadian Mining Hall of Fame.

Even better, the Canadian Mining Hall of Fame exhibit will be replicated in other Canadian locations – the first at Britannia Beach in British Columbia, well in advance of the 2010 winter Olympics in Whistler. Other installations across the country are also possible, creating a truly national presence.

With these projects well under way, we at the ROM, inspired again by Jack McOuat, will turn to the creation of Geology Galleries to fully describe Dynamic Earth from a Canadian point of view.

But tonight, we look forward to the Canadian Mining Hall of Fame’s rebirth before millions of people in the Teck Cominco Suite of Earth Galleries.

Thank-you for this partnership.